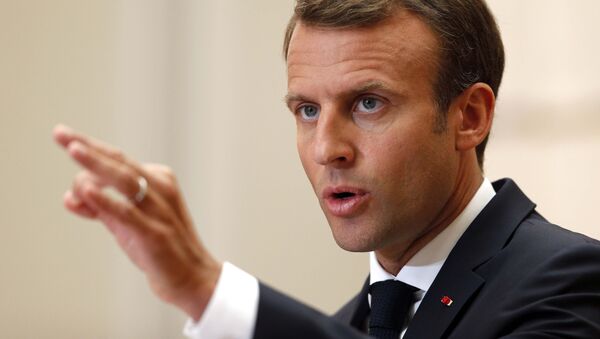 According to the French president, financial sanctions should be introduced against EU members that refuse migrants who have proven asylum status.

Speaking to reporters Saturday at a joint press conference with Spanish Prime Minister Pedro Sanchez, Macron stressed that Paris could not accept a situation where "countries that benefit massively from EU solidarity" give in to "national self-interest when it comes to the issue of migrants."

According to Macron, Paris and Madrid favor the setting up of "closed centers" on European soil for recently-landed migrants which would take on refugees in a 'coordinated way', allowing for a speedy investigation of whether or not they qualify for asylum status. These centers, created in cooperation with the UN Refugee Agency, would be based closest to where the migrants or refugees landed, the president said. For those applicants who are not eligible for asylum status, Macron emphasized the need for European-level cooperation to send these people back to their country of origin directly, rather than via transit countries.

Macron stressed that he was in favor of "sanctions mechanisms" in cases of non-cooperation, including possible restrictions on structural EU-level aid.

Italian Deputy PM: Very Existence of United Europe to be Decided Within the Year
The president's remarks come on the eve of an EU-level summit on immigration set to be held in Brussels on Sunday. The leaders of the Visegrad Group of countries, including the Czech Republic, Hungary, Poland and Slovakia refused to participate in the working meeting, complaining that such meetings should be organized by the European Council, not by the European Commission. According to Hungarian Prime Minister Viktor Orban, the Visegrad Group favors the idea of screening centers outside the bloc where asylum-seekers could present their case for protection. Budapest has proposed such centers in Africa, with Rome voicing its support for the idea. The EU's migration commissioner ruled out the proposal, calling it a "Guantanamo Bay for migrants" that's "against our European values."

The European Union has faced major political divisions over member countries' response to the mass influx of immigrants and refugees which began in 2015, with the EU's Eastern European members refusing to accept migrants on a mass scale and balking at the idea of refugee quotas. The current crisis is the most serious migration-related issue Europe has faced since the Second World War, and stems from the armed conflicts and economic problems plaguing a number of countries of Africa and the Middle East.