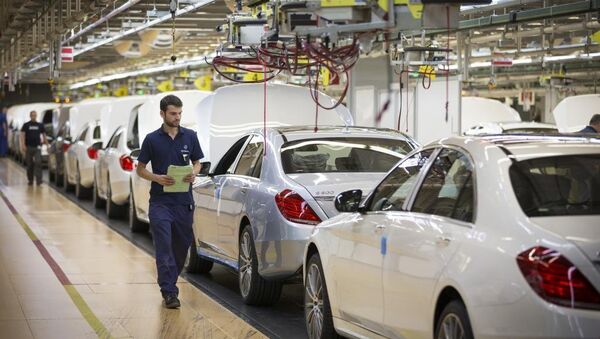 The imposition of US tariffs on European Union vehicles and car parts could affect $300 billion in trade, and impact nearly all of the EU's member states, Bloomberg reported on Friday, citing a European Commission report obtained by the news agency.

According to the EC's report, cited by Bloomberg, "an introduction of US tariffs would be met with equivalent penalties imposed by affected trading partners."

On Friday, US President Donald Trump threatened the EU in a statement that the US would introduce a 20 percent levy on all cars imported from the European Union unless the import duties and trade barriers are removed.

US Senators Urge Commerce Secretary to Reconsider Trump's Auto Tariffs – Letter
"Based on the Tariffs and Trade Barriers long placed on the US and it great companies and workers by the European Union, if these Tariffs and Barriers are not soon broken down and removed, we will be placing a 20% Tariff on all of their cars coming into the US. Build them here!" Trump said in a tweet.

According to the European Automobile Manufacturer's Association, EU and US car-related trade accounts for nearly 10 percent of total commerce between the two regions. However, the United States is reportedly the main destination of European car exports in terms of both volume and revenue.

Meanwhile, the European Union wants Donald Trump’s threat of a 25 percent tax on EU auto imports to be taken off the table, US-based media reported on Wednesday. Specifically, Germany’s leading auto makers are reportedly proposing to abandon all import tariffs for cars sold between the European Union member states and the United States.

In turn, the report obtained by Bloomberg emphasizes that a 20 percent tariff on imported vehicles would be a devastating scenario for German's major car producers that allegedly would suffer a dramatic financial loss in excess of 4 billion euros.

According to Bloomberg, the proposed trade barrier would also hit the US economy and could eventually result in "upwards of 180,000 jobs lost." Moreover, the total impact could reportedly be doubled by EU's countermeasures.