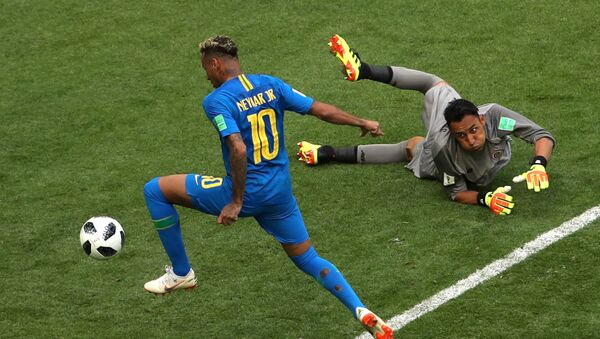 Despite an unexpectedly lukewarm start, the Brazil-Costa Rica clash however greatly intensified in its dying moments, with midfielder Philippe Coutinho and forward Neymar both scoring just minutes before the final whistle, and the Twitter community naturally rushed to chew over the outcome.

Despite the lax start to the game, the generally pessimistic stance over Brazil’s performance drastically changed after Neymar joined in Coutinho’s effort to grind out a much-anticipated, but at some point questioned victory, with some being moved by his tears:

Happy moments.. With our Happiness.. Love you Lord KING.. 😍 pic.twitter.com/2rDHWRUSxM

However, in the beginning, the lax start to the match was on everybody’s lips:

"If Costa Rica can do to Brazil what Croatia did to Argentina I am not going to do anything," one user remarked.

If Costa Rica can do to Brazil what Croatia did to Argentina I am not going to do anything. #WorldCup #BRACRC pic.twitter.com/zqPrZrsNUL

Many put a heavy emphasis in their reviews on Brazil’s poor play and unexpectedly “struggling” play:

This has been really poor from Brazil…. Costa Rica doing what they planned, frustrating the Brazilian team

Brazil is playing out that nightmare FIFA scenario where you keep creating great chances, but every shot either hits the bar or directly to the keeper….

Yet, for many the “heat was on,” with some humorously citing the "third" eye’s permission to score:

You now have my permission to score pic.twitter.com/AEZt6ZOVVH

Some shifted their thoughts to who they think are more promising players, namely Portugal’s Ronaldo and now retired Brazilian player Kaka. Meanwhile others recalled the glory days of numerous award-winning Brazilian national teams:

Hordes of users engaged in posting memes speculating on ways how to prevent Neymar from falling that often. The Brazilian star’s “misfortune” didn’t go unnoticed either:

All that’s missing is the Matrix cape… #Neymar #BRACRC pic.twitter.com/afgUoi00Gv

One user even opted for a photoshopped image offering speculations over Neymar’s foul record since the World Cup's kickoff:

Neymar is the only player to have been fouled 10+ times since the start of the tournament. #BRACRC #WorldCup18 pic.twitter.com/JFgH2Za0Rm

Although some felt sympathetic about the football titan’s errors, many commentators couldn’t stay out of satirical pondering over his “goat” and “diving” gestures. One user even assumed that is the trick how Neymar makes a penalty appeal:

& the most diving player in that tournament too

No less hilarious memes centered around fans cheering from the stands:

When you pull a sicky from work so you can go the game instead 😆 #BRACRC pic.twitter.com/S5eovLMVTi

Russian users took to Twitter to post "Goodbye Neymar" memes, with one woman suggesting that Ronaldo should teach Neymar how to dive:

​"Hey, Neymar, why don't you ask Ronaldo to teach you how to dive"

Another Twitter user even came up with a bit of World Cup-inspired poetry; although it is in Russian the rhyme can be grasped in English, as well: