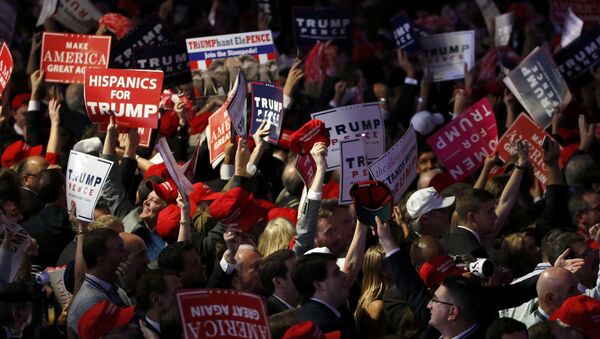 © REUTERS / Jonathan Ernst
Subscribe
In a shocking television outburst, former CNBC host Donny Deutsch upped the ante from calling Trump voters a “basket of deplorables” to “evil” and “bad guys,” comparing them to Nazis for supporting the President of the United States.

Talking to MSNBC TV show Morning Joe on Friday, Deutsch lambasted supporters of US President Donald Trump, calling them all sorts of bad names, which include "evil", "bad guys" and Nazis, not unlike Hillary Clinton, who called potential Trump voters a "basket of deplorables" back in 2016, when she was competing with him for the White House.

According to Deutsch, Trump voters bear full responsibility for any actions the president takes, which he characterized as "evil."

"We no longer can say Trump's the bad guy," he said. "If you're voting for Trump, you're the bad guy."

"If you vote for Trump, you're ripping children from parents," he said, referring to US border policy of taking children of illegal immigrants to internment camps, where children await being transferred to next of kin or a sponsor while their parents go to jail.

"If you vote for Trump, then you, the voter, not Donald Trump, are standing at the border, like Nazis, going ‘you here,' ‘you here'."

US National Guard Member Toys With Idea of Massacring Immigrants on Facebook
Deutsch is not the first one to compare the processing centers for children of illegal immigrants to Nazi practices. Earlier last week, former CIA director Michael Hayden tweeted a photo of a Nazi death camp with the caption, "other governments have separated mothers from children." And the online encyclopedia Wikipedia recently recategorized the US' migrant camps as "concentration and internment camps," placing them alongside the likes of Nazi death camps and those used by the British to control native populations in Kenya and Malaya.

Such comparisons sparked outrage among many. Earlier this week, CNN's Wolf Blitzer, talking in an interview with Hayden, said his grandparents had been murdered at the Auschwitz concentration camp and that no matter how much controversy Trump's policy sparked, "it certainly is not Auschwitz."

000000
Popular comments
Hermes, do you look for Jews under your bed at night before turning in - just in case? I was wondering if the old scapegoat was going to get a mention, and you didn't disappoint.
terryjohnodgers
23 June 2018, 08:50 GMT
000000
Folks need to realize that the entire West is now in an undeclared civil war. The side who wishes to maintain the slow destruction of the West versus the side that wishes to get back what they have stolen from us. And it could not be better reflected in how the controlled media has been descending into a rabid hate fest against a duly elected president and what he gives hope to for those who want to take their country's back from those who willingly destroy them.
terryjohnodgers
23 June 2018, 08:55 GMT
000000
Newsfeed
0
New firstOld first
loader
LIVE
Заголовок открываемого материала
Access to the chat has been blocked for violating the rules . You will be able to participate again through:∞. If you do not agree with the blocking, please use the feedback form
The discussion is closed. You can participate in the discussion within 24 hours after the publication of the article.
To participate in the discussion
log in or register
loader
Chats
Заголовок открываемого материала
Worldwide
InternationalEnglishEnglishMundoEspañolSpanish
Europe
DeutschlandDeutschGermanFranceFrançaisFrenchΕλλάδαΕλληνικάGreekItaliaItalianoItalianČeská republikaČeštinaCzechPolskaPolskiPolishСрбиjаСрпскиSerbianLatvijaLatviešuLatvianLietuvaLietuviųLithuanianMoldovaMoldoveneascăMoldavianБеларусьБеларускiBelarusian
Transcaucasia
ԱրմենիաՀայերենArmenianАҧсныАҧсышәалаAbkhazХуссар ИрыстонИронауОssetianსაქართველოქართულიGeorgianAzərbaycanАzərbaycancaAzerbaijani
Middle East
Sputnik عربيArabicArabicTürkiyeTürkçeTurkishSputnik ایرانPersianPersianSputnik افغانستانDariDari
Central Asia
ҚазақстанҚазақ тіліKazakhКыргызстанКыргызчаKyrgyzOʻzbekistonЎзбекчаUzbekТоҷикистонТоҷикӣTajik
East & Southeast Asia
Việt NamTiếng ViệtVietnamese日本日本語Japanese俄罗斯卫星通讯社中文（简体）Chinese (simplified)俄罗斯卫星通讯社中文（繁体）Chinese (traditional)
South America
BrasilPortuguêsPortuguese
NewsfeedBreaking
10:16 GMTHotel Rwanda Hero Convicted of Terrorism Charges After Being 'Kidnapped' From Dubai
10:08 GMTBoeing Beings Probe After Empty Tequila Bottles Found Aboard Air Force One Plane Under Construction
09:59 GMTCristiano Ronaldo Reacts to Manchester United's Win Over West Ham: 'Let's Go, Devils!'
09:55 GMT'Smacks of Racism': Anger in India as UK Refuses to Relax Rules for Those Vaccinated With Covishield
09:43 GMTElon Musk Favours 'Some Amount' of Space Cooperation With China
09:38 GMTEU Will Not Renegotiate Irish Protocol, but Ready to Engage With Britain, Senior Diplomat Says
09:31 GMTAOC Lambasted for 'Being Waited on by Masked Slaves' as Fury Around ‘Tax the Rich’ Dress Continues
09:28 GMTTrump Reportedly Looking to Depose ‘Very Bad for Republican Party’ Senate GOP Leader Mitch McConnell
08:55 GMTPutin Offers Deep Condolences to Relatives of Perm University Shooting Victims, Kremlin Says
08:39 GMTAustralia Trade Minister Looks Forward to Meeting With French Colleagues Amid Sub Deal Row
08:38 GMTVolcano Eruption on Spanish Island of La Palma Forcing Evacuations
08:06 GMTMen Sleep Worse During Waxing Moon, Women Unaffected – Study
07:58 GMTEmmy Awards 2021: Big Winners, 'Hollywood's Most Hated Man' and #SoWhite Controversy
07:30 GMTIndia: Uproar Over Arrest of BJP's Kirit Somaiya in Maharashtra For Accusing Minister of Corruption
07:10 GMTFinnish PM Embroiled in Product Placement Controversy Over Instagram Story
07:05 GMTEight Killed as Gunman Goes on a Shooting Spree at Russia's Perm University
06:27 GMTCanada Set to Deliver Verdict in Testy Vote as PM’s Cakewalk Becomes Nail-Biter
06:17 GMTTaliban Orders Women Working in Kabul to Stay at Home, Interim Mayor Says
06:12 GMTSweden Raises Taxes to Finance Largest Military Investment in Modern Times
06:01 GMTBoJo Vows UK’s ‘Ineradicable’ Love of France in Bid to Mend Fences Amid Diplomatic Row Over AUKUS