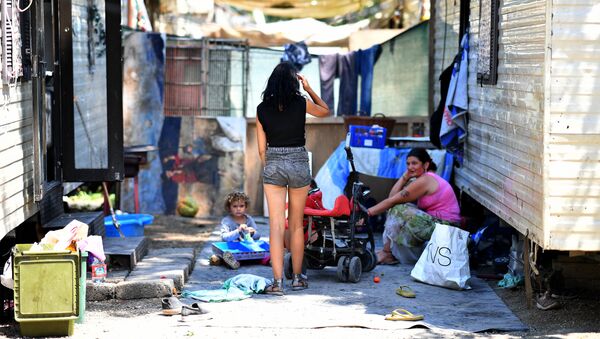 At present, there is an ongoing debate on a proposal by Interior Minister Matteo Salvini to take a census of the Roma in the country. Sputnik Italia has spoken with Carlo Stassola, president of the Association 21 July, which protects Roma rights, and Giovanni Nurra, coordinator of the Lega Party for Northern Sardinia.

Sputnik: Why do you think that Salvini's proposal on the census of the Italian Roma is wrong?

Carlo Stassola: Constitutionally, a census on an ethnic basis is impossible in Italy. It's an extremely serious violation of democracy though according to Minister Salvini, we need to do that for security reasons. It's extremely serious that a Minister of the Republic has said such things.

Sputnik: In Emilia-Romagna, there has already been an attempt by the left to take a census of the Roma present in the area. However, that initiative didn't receive such a response, did it?

Carlo Stassola: First of all, that was a social-based census. Emilia-Romagna has taken a census of the Roma living in the poorest housing conditions. Its main concern was the further creation of inclusive policies. For his part, Salvini suggests that illegal Roma-migrants are a problem security reasons, and those who are Italian, "unfortunately", we have to bear, as the minister says.

Merkel's 'Destiny Day': German Chancellor Takes Her Refugee Headache to EU Level
So these are two very different approaches. On the one hand, there's a census that analyzes social issues and on the other hand, there's a census aimed only at the Roma. To understand the gravity of the issue we should replace the word "Roma" with "Jew." What would happen if today we decided to take a census of all Jewish citizens? With the Roma we allow ourselves to say and do anything. It's serious and we are firmly opposed to this.

Sputnik: In the case of the stateless Roma, there is no country to expel them to, right?

Carlo Stassola: Exactly, the illegal Roma mentioned by Salvini fled from the former Yugoslavia and lost their citizenship. In Italy, due to bureaucracy, they haven't obtained any documents, so they are stateless persons. We need integration policies, like they have in Spain where there are 800,000 Roma, much more than in Italy. In the 1980s, inclusive policies were implemented in Spain, so today the overwhelming majority of Roma live in homes, work and pay taxes. We need to focus on inclusion and schooling rather than on the bulldozer, as proposed by Salvini.

Giovanni Nurra: I totally agree with Minister Salvini. Nations, when they want to regain their sovereignty, need to have control of the territory for security. It has nothing to do with racism, we simply speak of the application of a rule that applies to all other Italians, and it must apply to all people living on the territory of Italy.

Sputnik: This type of initiative has already been implemented by other parties, even the leftist ones, in many regions. However, only Salvini's initiative has aroused so much indignation, why?

Giovanni Nurra: Because we as a party, and Salvini as its leader, are under attack as sovereigntists. We are against the globalist policies that have led the world to be a sort of colony of faceless financial powers. We believe that states must regain their sovereignty, take back control of the borders, and take control of their economic policies.

As for the Roma problem as long as the PD proposes it, there is no problem, if Lega and Salvini propose it you immediately cry out against racism and xenophobia to shift the political debate from substance to form, thus preventing a resolution of the problem. The substance, in this case, is correct and this has been shown by the fact that other parties, even on the left, have proposed such measures. We also believe we should move away from the concepts of right and left. Now the international political debate is being formed by sovereigntists on the one hand and globalists on the other.

Sputnik: Census or not, the problem of Roma camps and abandoned children is undeniable. How do you think it should be solved?

Giovanni Nurra: The main problem to be solved is children's rights, which are not respected by the Roma. What rights does a child have? To have a family, an education and to live their childhood. Everyone knows, apart from the hypocritical narrative, that those camps often use child labor.

Roma often do not register their children; nobody knows how many and who they are, where they come from or what nationality they are. Salvini's initiative simply means that they must be registered in the Civil Registry like everyone else. They must be subject to our laws. If I have a baby and I don't register it within a pre-established period, I will be sanctioned. If I send my son to beg on the streets, social services will come and take him away. I don't understand why this doesn't apply to them. Why don't the laws apply to them? With the new government, we say that the laws are the same for everyone.

The views and opinions expressed by Carlo Stassola are those of the speaker and do not necessarily reflect those of Sputnik.