Never Mind Man-Marking, Mexico's World Cup Defender is on Blacklist in US 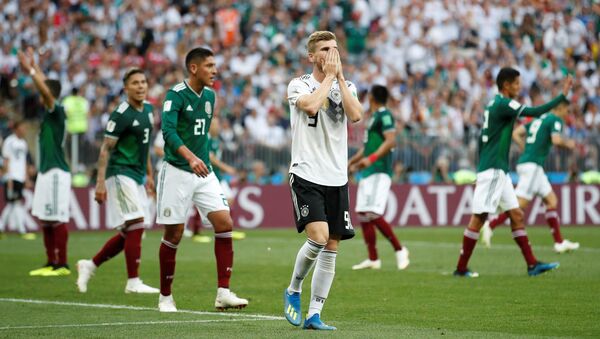 A Mexican footballer who became the first Latin American player to play in five successive World Cups when he came on as a substitute in their shock victory over Germany is on a US watch list. Rafael Márquez denies claims he laundered money for a Mexican drugs cartel.

Mexico play South Korea in Rostov-on-Don in their second match on Saturday, May 23, knowing victory will put them through to the knock-out stages.

But center back Márquez, 39, is something of a pariah within the squad, by all accounts.

He is on a United States Treasury Department blacklist of people it says have helped launder money for a drug cartel.

His inclusion on the list, drawn up under the Kingpin Act, prohibits US individuals, businesses and banks from having anything to do with him which has proved something of a problem when it comes to team sponsorship.

US Sponsors Steer Clear of Márquez

Márquez, who denies any wrongdoing, is not allowed to pose for any photographs with the FIFA World Cup's US sponsors like Coca-Cola or Budweiser and he does not even drink from the same branded water bottles as his team-mates.

He is the most experienced player in the squad and he was brought on for the final 15 minutes against Germany because manager Juan Carlos Osorio knew he had the nous to grind out the 1-0 result.

His appearance meant he became only the second outfield player to have turned out in five successive World Cups.

Rafael Márquez becomes the FIRST PLAYER EVER to captain his country in 5 different World Cups.

The other one was Germany's Lothar Matthäus.

Two goalkeepers have also achieved the feat — Italy's Gianluigi Buffon, and another Mexican, Antonio Carbajal, whose last tournament was all the way back in 1966.

Buffon would have played in a record sixth World Cup but for Italy failing to qualify for Russia.

So what are the allegations made against Márquez, who played for Barcelona and the New York Red Bulls before joining Atlas in Guadalajara in 2016?

He is said to have links with a drug trafficking organization headed by Raul Flores Hernandez.

In August last year the US Treasury Department's Office of Foreign Assets Control sanctioned Márquez along with 21 other people and 42 entities in Mexico, including a football team, Club Deportivo Morumbi, and the Grand Casino in Guadalajara.

The only player from the 2002 World Cup playing in the 2018 tournament Rafael Márquez. 🏆#GER #MEX #WorldCup #GERMEX #WorldCupRussia2018 pic.twitter.com/SMVD7tElnf

It was the largest designation ever in the office's history.

"I categorically deny any type of relation with this organization and with what has been stated in several news reports. I reiterate that I have never participated in any of these organizations that have been mentioned in these reports, and want to reiterate my duty to assist the various authorities and corresponding governments in a punctual manner," said Márquez in a statement issued at the time.

He said he would "immediately work on clearing up the facts alongside my team of attorneys" but 10 months later he has not been removed from the blacklist.

Cartel Has Links With El Chapo

The man who allegedly heads the drugs cartel, Flores Hernandez, is said to be based in  of Guadalajara but has alliances with the notorious Sinaloa cartel — headed by Joaquin "El Chapo" Guzman — and with the Jalisco New Generation cartel.

Flores Hernandez was arrested in July last year and the US is seeking to extradite him.

The year is 2058 and 79-year-old Rafael Marquez is gearing up for his 15th World Cup finals.

Using the Kingpin Act, the US Treasury Department regularly slaps sanctions on individuals and organizations they accuse of crimes.

In April this year they lifted sanctions against a Colombian football team, Envigado FC, after they broke ties with a drugs syndicate, known as La Oficina de Envigado.

Colombian international James Rodriguez began his career at Envigado at the age of just 14, scoring nine goals in 30 goals before moving to Argentina and eventually to Real Madrid.

Since 2000 more than 2,000 individuals and entities have been named  under the Kingpin Act for their alleged role in international narcotics trafficking.

Individuals convicted under the Kingpin Act could face up to 30 years in prison and fines of up to $5 million.