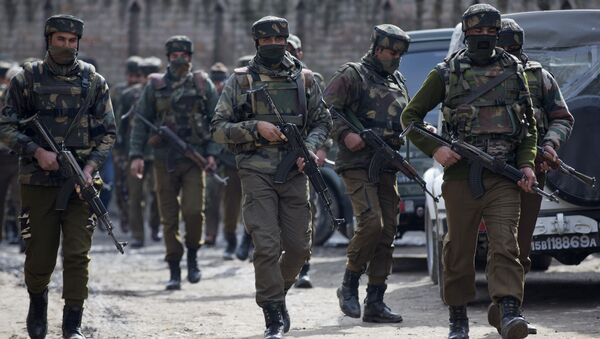 In March, India’s Ministry of Home Affairs categorically denied the presence of any “physical infrastructure” of Daesh* (ISIS) in the Kashmir Valley.

New Delhi (Sputnik) – The Indian police of Jammu and Kashmir claim to have eliminated four terrorists in an encounter in Anantnag on Friday morning. One police officer and the owner of the house where the terrorists had taken shelter were also killed in the shootout, the police claimed.

Meanwhile, mass protests have erupted near the site of the gunfight and in the adjoining areas,including Pulwama. Local media report that government forces were pelted with rocks by local youth to disrupt their operation against the besieged terrorists. As a precautionary measure, internet services have been suspended in Pulama and Srinagar.

In March, state police had eliminated Eiha Fazili, the self-proclaimed commander of the ISJK in Hakura in South Kashmir's Anantnag district. However, the Ministry of Home Affairs had categorically denied the presence of any terrorists using the name 'Islamic State', Claiming that Daesh had no "physical infrastructure"  in the Kashmir Valley and that the local militant might have used the platform to create confusion.