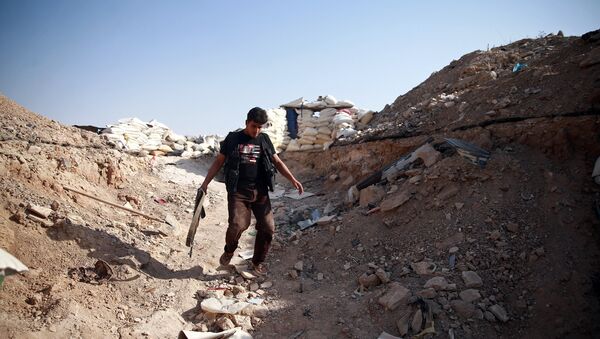 The Russian Reconciliation Center in Syria reported that the first large group of Free Syrian Army militants had sided with the Syrian government forces in the Southern deescalation zone.

"On June 22, after talks between the representatives of the Russian reconciliation center and the Syrian authorities with the militants of the Free Syrian Army in the Southern zone of de-escalation, the leader of the Tajammu al-Wiyat al-Omari [Omari Brigades] announced that his group is siding with the Syrian government," the center said in a statement.

According to the statement, the Omari Brigades leader also stressed that his group will fight against militants from Nusra Front* and Daesh* together with the Syrian army in the south of the country.

"By Friday evening, the first units of the Syrian army entered the settlements of Dama and Ashiyah in the Southern zone of de-escalation," the document said.

World
Assad on Possibility of Talks With Trump: Dialogue With US is Waste of Time Now
The Syrian military ramped up their operation in the southwest, which might be risky, as both Israel and Jordan are openly nervous about Syrian forces regaining control along with their borders. Israel says there are Iranian forces coming closer to the Golan Heights along with Syrian President Bashar al-Assad's troops, posing a danger to the state of Israel, while Jordan, in its turn, is more concerned about dealing with another wave of refugees fleeing southward from the conflict.

Most of the territory of Syria has been liberated by government forces with Russia's air support, while the remaining terrorist pockets are located in US-controlled areas, including Deir ez-Zor.