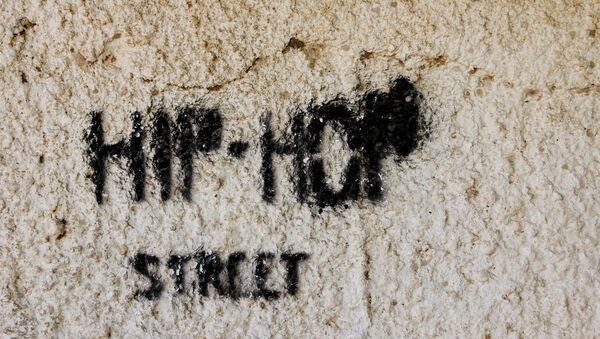 Before carving out a successful career in the music industry, East Midlands record producer Baby J made a pact with his Birmingham-born business partner, Rukus.

"If we got anywhere with our music, we'd do something for the kids so they would have better opportunities than we had," they agreed.

And after spending almost two decades working with children excluded from mainstream education at Baby People, Baby J discusses the issues facing young people today and how hip-hop can help.

The Soundtrack to Rebellion

"Hip-hop culture is the voice of youth, it's the fight back, the rebellion," Baby J told Sputnik.

"It says, 'I'm not happy with the way things are in the world'."

"An art form that started in the Bronx by a group of people with no money resonates," Baby says. "Artists who didn't have a gallery to display their work painted on trains; turntables were plugged into lamp posts and people would dance on the streets."

"Yet with no resources, hip-hop became the biggest cultural movement in the world. It's influence is unprecedented; nothing else has as much global impact as hip-hip culture," says Baby J.

Baby J has been running Baby People for 17 years, the UK's first dedicated hip-hop school which uses art and culture to engage and support young people.

End of a great week!!! pic.twitter.com/ihQJsiA3ER

"The genre unlocks a sense of ownership among young people; they find it on their terms and it becomes an area where they know more about it than their teachers do — and a lot more than their peers."

Stormzy, a 24-year-old south London artist recently made grime music mainstream after winning best British album of the year at the 2018 Brit awards for his Gang Signs & Prayer album.

During his performance, Stormzy took a lyrical swipe at Britain's prime minister over the government's handling of Grenfell, a tower block in the richest borough of London that burned to the ground killing 72 people in June 2017.

The charred building remains a visual reminder of the gap between rich and poor in Britain today.

READ MORE: Why People Will Dance in Shadow of Disaster at London's Notting Hill Carnival

However, despite hip-hop's healing capabilities cited by Baby J, its been blamed by the authorities for inciting gang violence with five members of a West London rap group banned for making drill music for three years.

In a legal first, the 1011 drill music group have been issued with a court order banning the musicians from making or performing music without prior police permission or uploading tunes on the Internet for three years.

"Trap, drill, grime, they're manifestations of hip-hop culture," Baby J explains. "There's no point in the police cracking down on a genre of music," he says."but it is nothing new, police crackdowns have happened at numerous points with Black music."

Baby J has worked internationally with music artists including Plan B, Mark Ronson and Amy Winehouse and is an authoritative voice on the UK's urban music scene and its roots.

"Young poets, grime MCs, rappers use this cultural art form as a way of expressing problems. Sometimes it becomes a glamorization of how messed up they've become," Baby J says.

"If people are poor, they're going to commit crimes and if people in those communities find a cultural outlet, their lifestyles are going to pour out."

"Policing music isn't going to solve that situation. It's not going to stop kids getting killed or prevent mental health issues; things that derive from poverty."

"At Trident and across the Met we are very clear we will take decisive action to get videos of this nature removed from the Internet; despite what the gangs may claim, there is a clear link, as in this case, to violence."

The five members of the drill group have also been banned from uttering any gang related rhetoric in songs or on social media.

Meanwhile Baby J has other ideas to prevent youth violence across the UK. "If you want to stop that you open youth clubs, you build parks, you create employment," he says.

"The murder rate of young people isn't dropping, the number of youths in custody is't going down. School exclusions aren't going down. It goes up every year, it doesn't get better, it gets worse. Locking people up doesn't stop crime," Baby J told Sputnik.