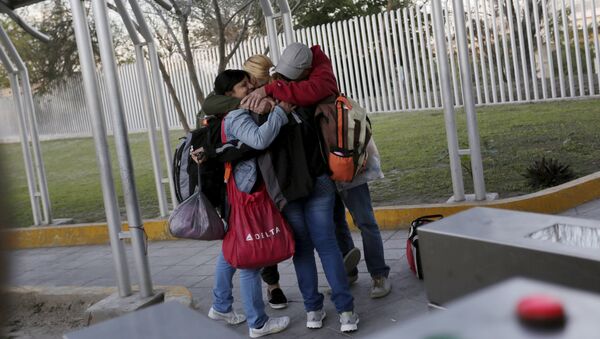 The US House of Representatives rejected a Republican bill on Thursday that would have limited legal immigration into the United States but provided no pathway to citizenship for young undocumented immigrants known as Dreamers.

The bill, which was introduced by US Congressmen Bob Goodlatte and Michael McCaul, was struck down with a 193-231 vote.

A second Republican-crafted immigration bill was supposed to come to the House floor on Thursday, but Republican leaders decided to postpone the vote until Friday so that they can try to garner more support for the measure, US media outlet Politico reported on Thursday, citing House Majority Leader Kevin McCarthy.

Both bills intended to outlaw the practice of separating children from parents who face criminal charges for illegally entering the United States.

Earlier in the day, Justice Department spokesperson Sarah Isgur Flores has commented on The Washington Post's report, which claimed that US border patrol agents would stop prosecuting immigrant parents who had illegally crossed the country's border.

"There has been no change to the Department's zero-tolerance policy to prosecute adults who cross our border illegally instead of claiming asylum at any port of entry at the border," Flores said as quoted by The Washington Post.

According to an earlier report by The Washington Post, citing an unidentified US official, the country's border patrol agents have been told to stop prosecuting parents with children who illegally cross the US border.

"We're suspending prosecutions of adults who are members of family units until ICE (Immigration and Customs Enforcement) can accelerate resource capability to allow us to maintain custody," the official stated, as quoted by the newspaper.

Recently, US President Donald Trump signed an executive order aimed, as he described it, at preventing the separation of children from their parents, who crossed the US-Mexico border illegally.

US Immigration Are Laws Weakest and Worst in the World - Trump on Twitter
The decision followed scathing criticism from different political groups, including Republican lawmakers, against the Trump administration's "zero-tolerance" policy, following recent images from a detention center in Texas showing children locked up in cages.

Reports circulating in US media have also shown images of children crying after their parents' detention by US Customs and Border Patrol agents, as well as pictures of children locked up in cages in warehouses.

Reacting to the reports,  American, United and Frontier airlines announced that they would no longer transport immigrant children who have been separated from their families.