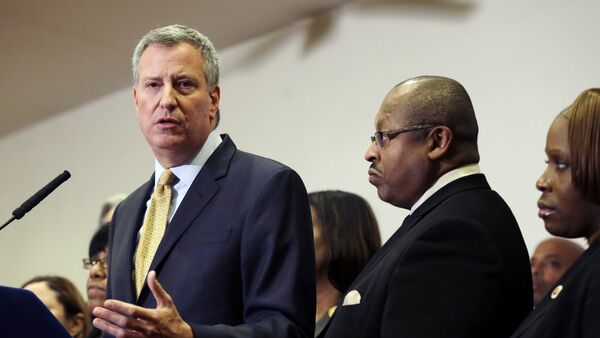 Hundreds of migrant children, detained at the US border, are being sent to processing facilities all across the US, and those children have diseases and parasites, says New York Mayor Bill de Blasio.

According to the mayor, there are at least 239 migrant children stationed in the Cayuga Centers in Harlem in New York City, as well as an unknown amount of children in other facilities, and those children bring with them third world diseases and parasites, which include bedbugs, lice and chickenpox.

"They are all from the southern border," De Blasio said in an interview with CNN Wednesday. "Some have lice, some have bed bugs, chickenpox, all sort of contagious situations. Just think about the chaos of it."

Of course, according to the pest extermination company Orkin, New York is already the eighth-most bed bug-infected city in the US this year, which is a significant improvement from 2017, when it was number four on their list.

Twitter Explodes as Melania Trump Makes Surprise Visit to Migrant Detention Camp
De Blasio said the police department would be deployed to ensure protection of the facilities, and he urged people not to direct their frustration at the centers holding the children.

"These children are placed in Spanish-speaking foster homes as they await reunification with a family member or sponsor, or return to the country of origin," Cayuga Centers website reads. The facility also provides long term care for "unaccompanied youth that do not have sponsors" but are kept in the United States because their home countries are too dangerous, it says.

According to The Hill, US Border Control has detained 2,342 migrant children and sent them across the US because their irresponsible parents have carried them along while crossing the border illegally. Until Wednesday, US authorities have been tasked with finding a family member or sponsor to put the children with, or send them back to their country of origin.

But on Wednesday, US President Donald Trump signed an executive order to detain migrant families together, "where appropriate and consistent with law and available resources," without sending children to care facilities. Under the new order, the Pentagon and other government agencies will be tasked with providing detention capacities for family units, CNN reports.