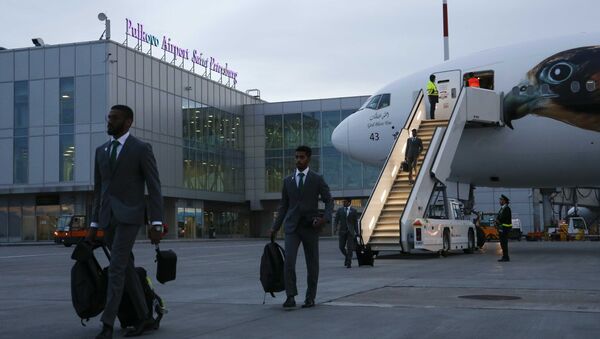 "There were no problems with the transport, there was rather a hasty first reaction… Later we found out that the plane touched down with both engines and flew off the next day. If there had been any malfunctions, then it wouldn't have flown back, that's it," Sorokin told reporters.

On Monday, a video appeared on the Internet showing flames leaping from the right wing of the airplane, on which the team flew to Rostov-on-Don for their match against Uruguay. Media reports suggested that there could have been a fire in the engine. The Saudi Arabian Football Federation later denied the reports of a fire.

Commenting on the issue later in the day, Russian Transport Minister Yevgeny Ditrikh stated that the incident would not influence the work of the tournament's transport system.

"We think that this incident will not influence the work of the transport system during the World Cup," Ditrikh said adding that no evidence of danger or threat to the health and safety of the passengers was revealed during the initial examination of the plane's engine.

Saudi Arabia Denies Players Punished After Defeat at World Cup Opener
Saudi Arabia was beaten by hosts Russia 5-0 in the opening match of the World Cup and suffered a 1-0 defeat at the hands of Uruguay in Rostov-on-Don on Wednesday, which means they were knocked out of the tournament. Saudi Arabia will face Egypt in their final Group A match on Monday.

The 2018 FIFA World Cup will continue until July 15, with the matches being played in 11 cities across Russia.