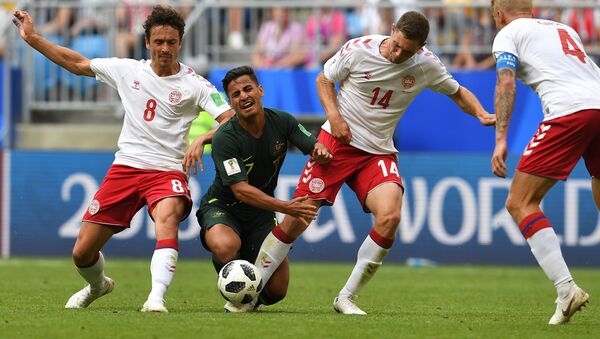 The match between Australia and Denmark has just ended in a draw, and not only the play on the pitch provoked mixed feelings, but the use of the VAR automated referee system again did.

One user chose to add a bit of irony to the expectation of the match's outcome from the very beginning,  by posting an image of Mary, Denmark’s crown princess; and most importantly, the lady proved to be right.

SOCCEROOS: Let that be a lesson to you: never love anything.

AUSSIE FANS: Even you?

Separately, hilarious memes in support of both Australians and Danes are in abundance:

Users once again engaged in a debate over the controversial use of the automated referee system (VAR), saying that with its advent, "1-2" penalties game would soon become typical at major tournaments. Many strongly doubted if VAR’s resolutions reflected the real state of affairs on the soccer field, with some saying this time it was biased against Denmark.

#VAR right or wrong?
never a penalty in my view… #Harsh #DENAUS

Good on the Aussie’s, but that decision is an absolute outrage. VAR can get ta fuck! #WORLDCUP #DENAUS

Yet, some voiced praise the use of VAR:

As soon as Aussies equalized by scoring a penalty, fans again indulged in posting memes some of them featuring conventional symbols, like koala fans, for instance:

One user preferred to "sum up" the hand ball penalty with the following picture:

Others apparently regarded Australia’s score as something mind-blowing:

"Me when Yussuf Poulsen approaches his own field," one Twitter user remarked contemplating on the RB Leipzig striker’s play, which many think leaves much to be desired.

One user, meanwhile, pointed to Australia and Nigeria having the same color pattern at this World Cup:

Some speculated about the Danish player Daryl Braithwaite, saying the match is generally an example of "bad game:"

Others apparently feel the same:

#DENAUS
You can bring in Dolberg now, it cannot get worse… pic.twitter.com/kjM0ijLTFJ

Daryl Braithwaite is a bloody Aussie!!! What's he doing coming on for Denmark?#DENAUS #WorldCup #Horses pic.twitter.com/npq85CYHnA

And another one responded tongue-in-cheek:

One user humorously took notice of an accidental snapshot of Mile Jedinak’s team glancing over their "cult:"

Find someone who looks at you the way Aziz Behich looks at Mile Jedinak.

Australian coach Bert van Marwijk didn’t go unnoticed on Twitter either, becoming the focus of a number of memes: