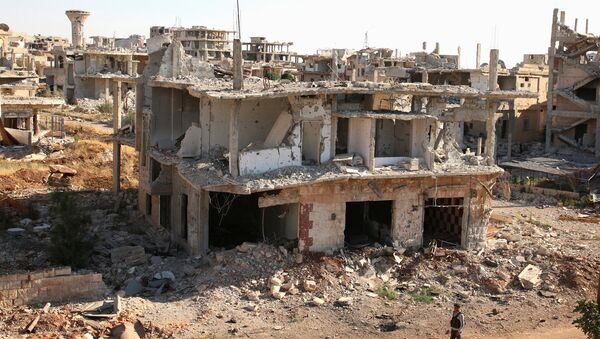 Syrian Army activity has increased significantly in the nation’s southwestern region, where rebel-controlled areas border Jordan and the disputed area of Golan Heights.

Syrian Army has started shelling of the town of Kafr Shams Wednesday, a frontline town between government-controlled territory and land occupied by militants, Haaretz reported the same day, citing sources in the opposition.

According to Syria.liveuamap.com, a layer of militant-controlled territory separates Syrian government from the Golan Heights, a disputed area between Damascus and Israel.

OPCW Chief: Chemical Weapons Report on Syria to Be Released Within Week
Syrian state media reportedly blamed the escalation on the militants who attacked civilians in what is supposed to be a de-escalation zone.

The Syrian military operation in the southwest is going to be risky, as both Israel and Jordan are openly nervous of Syrian forces regaining control of its border. While Israel says there are Iranian forces coming closer to Golan Heights along with Syrian President Bashar al-Assad's troops, posing danger to the state of Israel, the Jordanians are more concerned about dealing with another wave of refugees fleeing southward from the conflict.

The Syria-Jordan border is closed because of the armed conflict, which consequently damages both the Syrian and Jordanian economies, Haaretz reports. The Syrian forces has already dashed towards its southernmost city of Daraa, but there is still a layer of militants between the city and the border, a thin connection between two otherwise separated militant-controlled "basins" east and west of Daraa.

The shelling is expected to be followed with a full-scale clash, as both locals and militants reported a buildup of government forces near the southwestern region. As per Haaretz, rebels claim Iranian troops have a large presence alongside Assad's forces, something that Damascus officially denies.