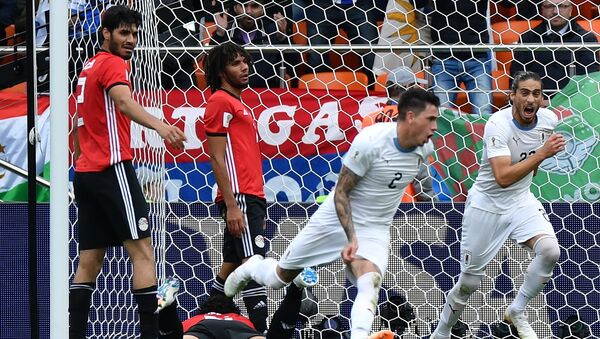 Russia defender Yuri Zhirkov said Tuesday night that there were "a few nervous moments" after Egypt star striker Mohamed Salah converted a penalty to give his side a glimmer of hope in their World Cup encounter on Tuesday.

"Egypt are a good team, they played fast… There were a few nervous moments after Salah's goal. It was difficult to contain Salah. He is a world-class player," Zhirkov told journalists.

Russia held a solid victory over Egypt 3-1 in St. Petersburg on Tuesday. After their second group-stage match, the hosts have six points and are in with an excellent chance of reaching the knockout stage, where they could face Portugal, Spain, Iran or Morocco.

"We won't be looking for a draw in the match against Uruguay," Kutepov said. "There is no tragedy in penalty after a video replay. There are problems in every game… Was there a sense that Salah had played not to his full ability? Then, I don't see any reason to go onto the pitch if you can't play to your full ability," Kutepov added.

Twitter Reacts to Russia’s 3-1 World Cup Victory Over Egypt in St Petersburg
"We have fulfilled our first goal, I'm proud and happy. We have fulfilled our game plan. We understood that Egypt would attack as they needed to win, but we counterattacked, we were sharper. I think we performed better [than Egypt] in the first half, too. I think we controlled everything. We are happy!" Samedov told journalists.

He added that he believed Russia put in a better performance than in their first match when they thrashed Saudi Arabia 5-0.

Russia will play against Uruguay in their final group-stage match in Samara on Monday.