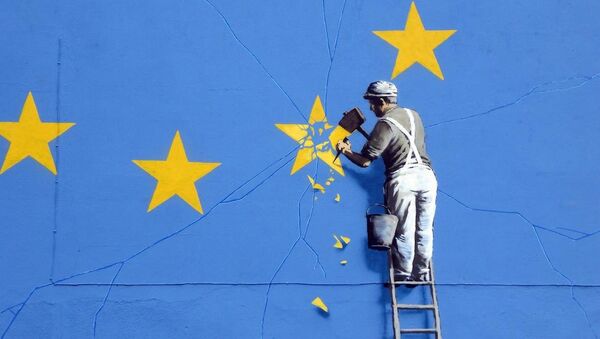 Next week, the leaders of EU nations will assemble in Brussels for a European Council summit, and one of the meeting points will be to come up with a joint conclusion on Brexit, according to media reports.

The leaders of 27 EU nations are expected to issue a joint statement blaming UK Prime Minister Theresa May for a “lack of progress” on UK-EU Brexit negotiations, despite the looming deadline.

However, according to the draft of the document, the leaders plan to express their "concern that no substantial progress has yet been achieved on agreeing to a backstop solution for Ireland/Northern Ireland."

READ MORE: May 'Got Another Card Up Her Sleeve': UK MPs Plan to Block Brexit — Politician

The motion also urges "member-states and all stakeholders to step up their work on preparedness at all levels for all outcomes," the Independent cited the leaked document. What is meant by the last sentence is the probability of Britain not coming up with a UK-EU deal in time, usually referred to as a "no deal" scenario. If this were to happen, EU countries must have contingency plans at hand, and work on them must be accelerated as soon as possible, according to the paper.

EU leaders want "further clarity from the UK with regard to its position on the future relationship," the document reads.

While the document is written in an appropriately diplomatic manner, this is actually an escalation of language to the point of a direct warning to the UK's PM Theresa May, the newspaper notes.

If We Have No Brexit Deal, It Will Be a Serious Crisis - UK Lawmaker
Although the British prime minister will also be present at the summit, she will be excluded from Brexit talks, as the EU has made it clear from the start that Brexit negotiations would only be conducted through European Commission chief negotiator Michel Barnier.

Earlier this month, the UK published a plan to prevent a hard border between the Republic of Ireland and Northern Ireland, but EU officials immediately criticized the plan, saying it raises more questions than it answers, the Independent reports.