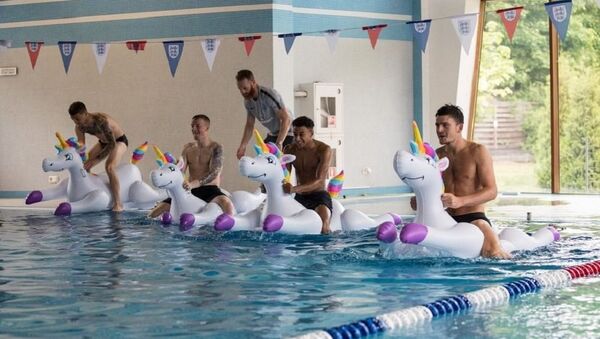 What may at first seem a bizarre training session actually is the English squad recovering from their dramatic World Cup opener in a swimming pool. The photos instantly went viral, provoking an avalanche of reactions on social media.

After Monday's last-gasp 2-1 win against Tunisia, the English players had a recovery day in Repino, a Russian village serving as their base for the group stage. The team is now getting ready for the next Group G clash with Panama, with the preparations involving a bit of basketball and gym workouts.

The highlight of England's recovery day, however, was a spectacular race in the swimming pool, which saw Jesse Lingard, Jordan Pickford, Harry Maguire and Kieran Trippier ride inflatable unicorns.

The unusual photo session has given rise to many laughs and smiles on the Internet, with users praising England's great team spirit.

Work hard, play hard. The togetherness in this England team is the best it's been for a long, long time! 👏🏴󠁧󠁢󠁥󠁮󠁧󠁿 https://t.co/2X8fBDatyC

Imagine England actually win the World Cup, and the secret all along was racing inflatable unicorns in training… #WC18 pic.twitter.com/h2PgBQnooY

This is what I love about this @England team & Southgate and his staff must take so much credit. Racing unicorns 🦄😂 #recovery https://t.co/05niOqB5SS

Respect to this………. Gareth again letting the team bond and have a laugh. Yes job to do but chilled togetherness is important ⚽️🏴󠁧󠁢󠁥󠁮󠁧󠁿😁 #Eng #ThreeLions

Some netizens, however, have been more critical of England's new relaxation method.

Nothing serves as a crushing indictment of the lameness of international football more than a photo of England players riding inflatable unicorns. pic.twitter.com/9qEwOuaf0w

And this is why england will never win big tournament

England players are so sure football is coming home that they're not even arsed. Just racing unicorns in the pool. No biggie. pic.twitter.com/AiVvX2jC4r

Others have gone even further to compare the unicorns with England's chances in Russia.

Much like unicorns, England's chances of winning the World Cup don't exist either.

There is a bigger chance of 11 of those Unicorns winning the World Cup than England! They are always fond of the idealisms of a fantasy! #England #WorldCup⁠ ⁠ pic.twitter.com/tSwFwQctII