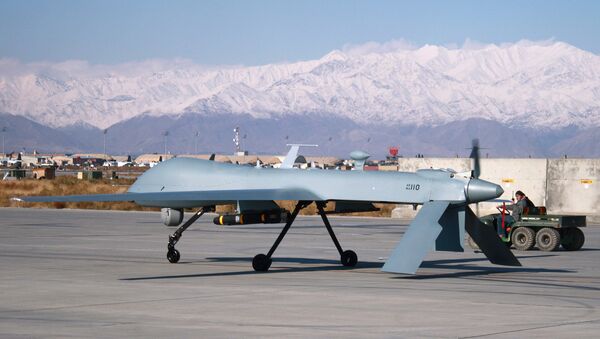 © AFP 2021 / Bonny Schoonakker
Subscribe
The United States’ military’s air assault campaign in Afghanistan is reaching heights not seen since at least 2009 - as far back as available data goes - according to a new report from Air Force Central Command.

The uptick in payloads delivered comes 17 years since the US invaded the country in an effort to oust the Taliban from power. Just last November, America's top general in Afghanistan, Gen. John Nicholson, said that the war was in a "stalemate."

As of May 2018, the US has already dropped 2,339 weapons from the Afghan skies since the start of the year. May saw the deployment of some 591 munitions in Operation Freedom Sentinel, more than any month since October 2017.

Number of weapons released by aircraft under Combined Forces Air Component commander control in Afghanistan between 2013 and May 2018.
© US Air Forces Central Command

Weapon deployment data for them Air Force Central Command is only available dating back to 2009. The year that saw the most airborne weapon deployments, 2011, had seen 491 fewer weapons dropped by the end of May than 2018, meaning the US is on pace to shatter its previous record for bombs dropped in Afghanistan.

Number of weapons released by aircraft under Combined Forces Air Component commander control in Afghanistan between 2009 and 2013.
© US Air Forces Central Command

"US air operations in May put tremendous pressure on every branch of the Taliban's network," Lt. Gen. Jeffrey Harrigian, Combined Force Air Component Commander said in the report, which was released Monday.

Since May, the US has continued to decapitate extremist leaders in Afghanistan with air strikes. Sputnik News reported that the head of the Taliban in Pakistan — Tehrik-e-Taliban Pakistan (TPP) — was killed in a Thursday strike on the Afghan side of the border with Pakistan. In February, the TTP said a US strike killed Khalid Mehsud, who was thought to be the Pakistan Taliban's senior leader, also in Afghanistan.

Meanwhile, despite such victories, the war in Afghanistan shows few signs of abating. New figures from Afghan officials suggest that the Taliban's strength in the country is only growing, Sputnik News reported. Meanwhile, the Taliban continues to wage war on the government and US forces, having taken the lives of 30 Afghan troops in violation of the government's ceasefire on Tuesday.

Max Abrahms, a member of the Council on Foreign Relations, told Sputnik News in October "the notion that we're going to turn the tide [against the Taliban] doesn't seem realistic."