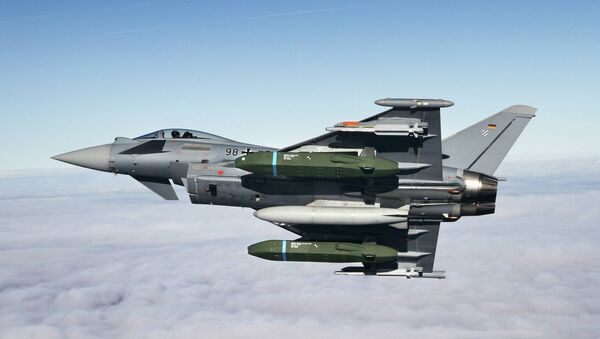 Germany is seeking clarity from the US about upgrading the Eurofighter Typhoon to handle nuclear bombs, pitting Berlin’s commitment to multilateral defense in NATO against a desire to rely on European-made jets instead of US-made alternatives.

Germany's next major aircraft acquisition has proved nothing short of a political hot potato. Lt. Gen. Karl Müller was fired from his role as chief of staff of the German Air Force for supporting Berlin's purchase of Lockheed Martin's F-35 aircraft in March. Others in the German Defense Ministry have instead favored buying European-made aircraft instead of the F-35 or even other, more proven American jets like the F/A-18 or F-15E.

Müller said last November that "the Luftwaffe considers the F-35's capability as a benchmark for the selection process for the Tornado replacement, and I think I have expressed myself clearly enough as to what the favorite of the air force is." However, others within the German MoD rebuked Müller before he was let go, saying in December the Eurofighter was the "primary" option to replace the Tornado. The Tornado was manufactured by the Panavia company, organized by Germany in conjunction with the Italian and British governments for the task.

Germany and France have a joint agreement to develop a future fighter jet, but the Franco-German plane is years away from becoming a reality.

With Müller out of the way, German officials seem keen on moving forward with buying the Eurofighter Typhoon. However, according to Germany's NATO commitment, it must field jets capable of carrying nuclear weapons, and that means upgrading the Eurofighter to handle the powerful bombs.

Reuters reported Wednesday that Germany sent the Pentagon a request in April seeking information on whether it is possible to certify the jets for nuke-carrying duties, the cost to upgrade the Typhoons, and how long it would take to complete those modifications.

Citing sources who spoke on the condition of anonymity, Reuters noted that the Pentagon's response will play a role in determining whether Berlin ultimately buys Eurofighters or another aircraft to replace the Tornado fleet, which is slated to begin retirement in the middle of the 2020s.

Executives from Airbus, Lockheed Martin and Boeing are visiting German officials this week to make more presentations about their product offerings in the fighter aircraft industry, according to Business Insider.

While Germany is not a nuclear power in its own right, Germany, Italy, the Netherlands and Turkey have a combined stockpile of approximately 200 B-61 gravity bombs as part of NATO obligations, according to the Nuclear Threat Initiative.

Even though Berlin seems keen on picking anything but the F-35, a costly "national disaster" that some call "one of the greatest boondoggles in recent military purchasing history," the fifth-generation aircraft is, technically, scheduled to carry nukes around the time Germany's Tornado fleet retires. As a consequence, Germany wouldn't have to worry about whether an F-35 purchase would be compatible with NATO obligations.