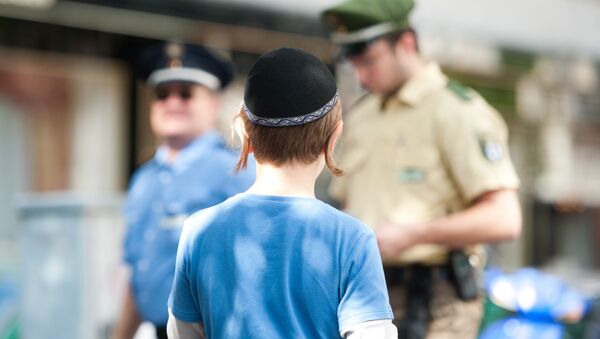 A young man is on trial in Germany after a video filmed back in April emerged on the web showing him attacking people wearing kippas — traditional Jewish skullcaps – in the middle of Berlin.

A Palestinian migrant who attacked two people in Berlin for wearing Kippas is to face court Tuesday.

The young man attacked his victims with a leather belt, shouting "yahudi," which means "Jews" in Arabic. One of the victims sustained injuries from the attack.

According to German daily Bild, the attacker is named Knaan S., a Palestinian migrant who entered the country through Syria, and he was registered at a refugee home in Brandenburg state outside Berlin but went to live in the capital, France 24 reports.

Curiously, one of the victims, a 21-year-old student, was not actually Jewish, but an Israeli Arab. He told Deutsche Welle that he was conducting a social experiment aimed at determining how safe it is to walk in downtown Berlin wearing Jewish clothing.

He said he had uploaded the video online "for the police, the German people and the world to see how terrible it is these days to walk through Berlin's streets as a Jew."

Israel Did That! US Official Blames Syria Strike on IDF
Following the incident, Joseph Schuster, the head of the Jewish community in Germany, called on Jews to avoid wearing religious symbols in big cities due to a heightened risk of targeted attacks, according to France 24. The call has been met by fierce criticism from Jewish organizations, with European Jewish Association head Rabbi Margolin arguing that to not wear the kippa "fulfills the vision of anti-Semites in Europe."

Since 2015, Germany has seen a marked increase in anti-Semitic sentiments, largely due to a massive influx of Middle Eastern migrants, the website notes. The far-right movements which have gained popularity amid the migrant influx, aren't helping the matter either.

Knaan S., the Palestinian attacker, will face court Tuesday for the April attack; he is reportedly charged with dangerous assault and hate speech. The verdict is expected to come out later the same day.