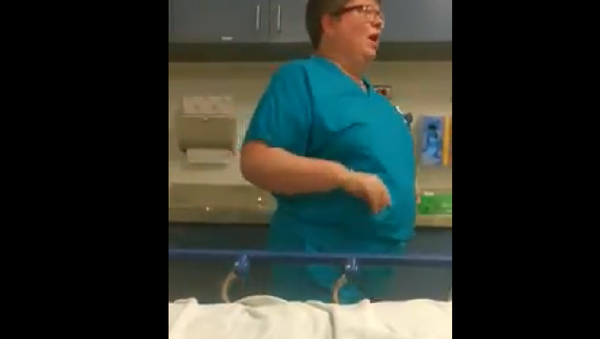 © Facebook/DonaldBardwell
Subscribe
A California emergency room doctor was suspended this week after a video of her accusing a patient of wanting narcotics went viral on Facebook.

The video, which has been viewed more than 5 million times so far, was posted Tuesday by Donald Bardwell. His son, 20-year-old Samuel Bardwell, was admitted to El Camino Hospital in Los Gatos, California, last week because he had experienced an anxiety attack.

​According to Donald, his son was throwing up and going in and out of consciousness after his basketball practice on June 11, the Washington Post reported Monday.

The emergency room doctor, Beth Keegstra, who worked for a company contracted by the hospital, according to a June 14 press release by El Camino, was skeptical that Samuel was experiencing any pain or anxiety at all.

"He is completely alert and awake right now," Keegstra is heard saying in the video.

When Donald explains that he is worried that his son will have another anxiety attack after leaving the hospital, Keegstra responds, "I'm sorry, sir, you are the least sick of all the people who are here, who are dying."

She then tugs at the patient's arm, trying to force him to sit up. The patient tells her that he cannot physically stand up and that he is having trouble breathing normally.

"He can't inhale, wow, he must be dead. Are you dead, sir?" Keegstra asks Samuel in a sarcastic tone.

"So, you need narcotics? That's what you need?" she adds.

"Did I say I need narcotics?" the patient responds. "I just need a pain reliever and anxiety medication, because I am in pain and I have anxiety."

"This is ridiculous," Keegstra interrupted. "I came in here wanting to help you, and you're just, you're turning your story around, you're changing your story, you're saying one thing and then you're telling me another thing."

Samuel, who is a student at West Valley College in Saratoga, takes Klonopin, a medication that treats seizures and anxiety disorders, according to his father. Donald told SFGate last week that his son hasn't taken his medication for several days by the time of the June 11 incident.

"He had a prescription waiting for him at the pharmacy but couldn't pick it up; he's a student and he works," Donald told SFGate. "We didn't know what the consequence of not taking the meds would be."

According to the American Addiction Centers, Klonopin withdrawal symptoms include nausea, anxiety and seizures.

On June 14, El Camino Hospital released a statement stating, "This week, a patient who visited the emergency department at our Los Gatos campus had an interaction with a physician whose demeanor was unprofessional and not the standard we require of all who provide care through El Camino Hospital. We have expressed our sincere apologies and are working directly with the patient on this matter. Please know that we take this matter very seriously and the contracted physician involved has been removed from the work schedule, pending further investigation."