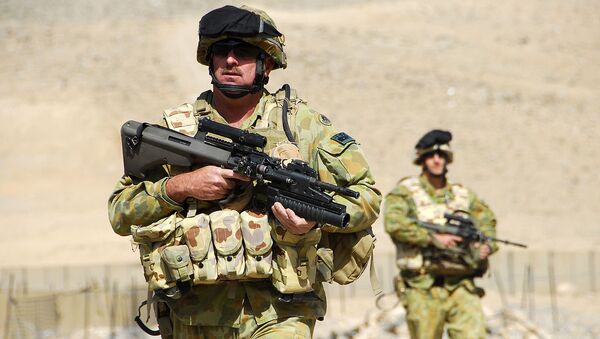 CC BY 2.0 / ISAF Headquarters Public Affairs Office / Australian soldiers Afghanistan
Subscribe
An Australian troop has killed an Afghan amputee keeping his prosthetic leg as a souvenir, The Independent reported, citing findings from an investigation. Moreover, it was reported that on the same mission a new trooper was pressured by higher-ranking soldiers from the Special Air Service Regiment to kill an unarmed elderly detainee.

The news comes as Australia’s Prime Minister Malcolm Turnbull condemned troops from the same forces for flying a Nazi flag from a car in Afghanistan. Sputnik discussed this issue with Dr Ben Wadham, a Flinders University expert on the armed forces and a former military investigator.

Ben Wadham: I guess, historically, the SAS had cases like this over the years going back into through Afghanistan. There’s a few things happening in Australia and obviously the world’s been at war now for 20 odd years around Afghanistan. We know that in the last few years there’s been a strong sort of right-wing development, the growth of right-wing politics across the globe and that’s what we got here.

And the third thing we got here is that we’ve built military units, particularly arms corps units, so infantry units, as well as SAS, which are more exclusive again; [they] tend to be very closed institutions, tend to have very sort of right-wing ideologies and they see themselves

Aussie Man Nabbed with Nazi Submachine Gun at Traffic Stop
I guess as being above community standards or beyond the law. This has brought some hate onto Australian troops over time. I think we’ve had this problem for some time; the extent of it, the intensity of it and the extremity of it is a little bit different, but it tends to fit within the same sort of culture and sort of practices.

Ben Wadham: I could tell you what we have there now. We’ve been going through a major pullout obviously, withdrawal; we’ve been here since the beginning, we tend to follow the US into most theatres that have a relevance. We’ve been trying to withdraw; we’re reducing our presence in Afghanistan.

Sputnik: Previous reports indicated that soldiers involved in similar situations were disciplined – why are we still seeing such disturbing news? Do you think it’s down to just sheer boredom or what do you think the relative reason for this is?

Peace Could Prevail in Afghanistan if Foreign Actors Leave Country - Analyst
Ben Wadham: It does seem to happen in particular places, it is very much a product, an artifact, of arms corps, infantry units or commando units or special air service units, so men with a particular ideology. It’s a wicked war and the insurgency muddies the waters and if you listen to some of the SAS troops or the troops that have come back, they sort of say that the enemy will go to any extent and it’s almost like they’re justifying themselves going to any extent.

The other side of this is that watery humor in those sort of environments like policing or ambulance service, where there is death and there is injury and horror – with the Nazi flag someone had to fold it up, someone had to put it in their luggage and take it over. Are they Nazis? Probably not, it’s probably that they just have some sort of twisted humor and they want to make light of it.

But these activities definitely fit within the general kind of sympathies of that environment. I know that we don’t want soldiers to necessarily be progressive and meet the needs and niceties of civil society, but at the same time we’re talking about potential criminal activity here and international crime, we’re talking about the killing of people, executive killings.

Taliban Troop Strength Surges in Afghanistan Despite US Bombing Campaign
I guess just one final point is that the Australian troops against advice during sort of 2012 onwards adopted a real sort of command and kill type of strategy, not a lot of moving into villages, moving into environments and executively taking care of the situation when it was required, that level of energy or not. There’s a few things feeding into it.

Sputnik: Is this type of situation prevalent in Australian armed forces in Australia, is this kind of news that comes out from time to time or is this just an isolated event? Because I mean it is difficult to police this kind of activity, isn’t it?

Ben Wadham: I’ll take you back to around 2000 when there was quite a serious investigation of SAS troops kicking the face off a dead militia; there’s been a few other cases as well. Just recently in 2012 the Australian defense forces, like other defense forces, has undergone a kind of investigation into institutional abuse. One of the big problems there is sort of hazing or beasting, as it’s called in Britain.

You can’t deny that this sort of culture is there, it’s just that the institution has been trying to foster the ability, the capacity, for the use of violence, but at the same time it really struggles to contain it.

Five Policemen Killed in Taliban Car Bomb Attack in Afghanistan - Reports
It’s a general problem, but there are also these sort of things that pop up like extreme sort of issues or anomalies if you’d like, but the power had brought up wave the Australian defense forces are investigating from three or four different directions, the allegations are quite serious, they don’t happen all the time, but we do see them pop up as you probably do in a lot of militaries.

Nonetheless the Australian defense force really has to get on top of that – it’s a cultural issue, it can be changed. One of the key issues is that maybe we’ve given the SAS and commandos too much rope and not enough scrutiny, not enough sort of command present. There seems to be a complete – a real lack of failure of command – I mean the Nazi flag is a failure of local command.

The views and opinions expressed by Ben Wadham are those of the speaker and do not necessarily reflect the position of Sputnik.

carlos deblanco
19 June 2018, 06:48 GMT
000000
Ben Wadham: I could tell you what we have there now. We’ve been going through a major pullout obviously, withdrawal; we’ve been here since the beginning, we tend to follow the US into most theatres that have a relevance. We’ve been trying to withdraw; we’re reducing our presence in Afghanistan. ben try answering the questions.
michael
19 June 2018, 07:35 GMT
000000
Newsfeed
0
New firstOld first
loader
LIVE
Заголовок открываемого материала
Access to the chat has been blocked for violating the rules . You will be able to participate again through:∞. If you do not agree with the blocking, please use the feedback form
The discussion is closed. You can participate in the discussion within 24 hours after the publication of the article.
To participate in the discussion
log in or register
loader
Chats
Заголовок открываемого материала
Worldwide
InternationalEnglishEnglishMundoEspañolSpanish
Europe
DeutschlandDeutschGermanFranceFrançaisFrenchΕλλάδαΕλληνικάGreekItaliaItalianoItalianČeská republikaČeštinaCzechPolskaPolskiPolishСрбиjаСрпскиSerbianLatvijaLatviešuLatvianLietuvaLietuviųLithuanianMoldovaMoldoveneascăMoldavianБеларусьБеларускiBelarusian
Transcaucasia
ԱրմենիաՀայերենArmenianАҧсныАҧсышәалаAbkhazХуссар ИрыстонИронауОssetianსაქართველოქართულიGeorgianAzərbaycanАzərbaycancaAzerbaijani
Middle East
Sputnik عربيArabicArabicTürkiyeTürkçeTurkishSputnik ایرانPersianPersianSputnik افغانستانDariDari
Central Asia
ҚазақстанҚазақ тіліKazakhКыргызстанКыргызчаKyrgyzOʻzbekistonЎзбекчаUzbekТоҷикистонТоҷикӣTajik
East & Southeast Asia
Việt NamTiếng ViệtVietnamese日本日本語Japanese俄罗斯卫星通讯社中文（简体）Chinese (simplified)俄罗斯卫星通讯社中文（繁体）Chinese (traditional)
South America
BrasilPortuguêsPortuguese
NewsfeedBreaking
10:47 GMT'Cringe and Embarrassment': Australian Defence Minister Mocked for Not Knowing How to Do Elbow Bump
10:45 GMTApple, Google's Actions Considered Interference in Russia's Affairs, Senior Lawmaker Says
10:42 GMT'I Can't Speak to Validity': Pentagon Spokesman Elusive Over Milley's Alleged Secret Calls to China
10:41 GMTTaliban Bans Women From Entering Ministry of Women Affairs, Employee Says
10:33 GMTCapitol Fence Being Set Up to Fortify Area Ahead of 18 September Rally
10:30 GMTUK Defence Sec. Fires Back at China's AUKUS Accusations of 'Cold War Mentality'
09:55 GMTAUKUS Not Intended to Be Adversarial to Other Countries, UK PM Johnson Says
09:19 GMTRed Bull Boss Slams Lewis Hamilton and Mercedes for Faking His Injuries After Italian GP Crash
09:10 GMTAs Toll of South Africa Unrest Exceeds BLM Riots' Damage, Activist Says Instigators Will Walk Free
09:07 GMTPolice in Spain Evacuate Parts of Downtown Oviedo Over Bomb Threat
08:48 GMTWoman Who Threatened to Kill VP Kamala Harris Because She is 'Not Actually Black' Pleads Guilty
08:34 GMTNorth Korea Touts Its Railway-Borne Missile System to Deal 'Harsh Blow to Threat-Posing Forces'
08:11 GMTChina Accuses US of Intensifying Arms Race by Creating AUKUS
07:55 GMT'Stab in the Back': Ex-French Official Blasts New Trilateral Defence Deal Between US, UK & Australia
07:38 GMTTaliban Seeks to Build Good Relations With World Through Diplomacy, Spokesman Says
07:34 GMTPalestinians Welcome Egypt's Mediation Between Israel & Palestinians But Will It Yield Results?
07:24 GMTFourth or Fifth COVID-19 Wave 'Likely', Danish Strategists Warn
07:00 GMTLive Updates: CSTO to Take Steps to Protect Southern Borders as Situation in Afghanistan Worsens
06:46 GMTFrench FM 'Angry' With Australia's Decision to Terminate Submarine Contract, Expects Explanations
06:37 GMTPutin Says He'll Self-Isolate for Several Days as 'Several Dozen' Around Him Have Contracted COVID