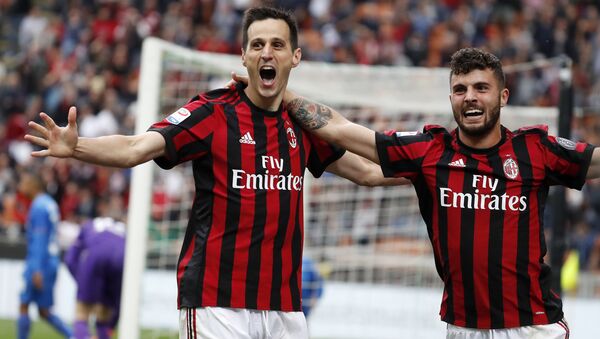 A Twitter storm has erupted over reports that Croatia has thrown out its striker Nikola Kalinic from the World Cup squad, with many netizens saying the forward should be banned from the national team.

Croatia manager Dalic has opted to throw Nikola Kalinic out of the World Cup squad on the morning of June 18. As there has been no official announcement, the head coach has yet to tell his side of the story later on Monday at a press conference.

Nikola Kalinic, AC Milan's striker, was to play against Nigeria as a second-half substitute in his team's first Group D match on Saturday. However, according to the Croatian media, the 30-year-old refused to do so, claiming he felt pain in his back.

The news has prompted furious reactions among internet users. Many of them claim the forward doesn't deserve to play for the Croatian team and slam Kalinic as an "embarrassment."

Terrible player, terrible attitude. He doesn't deserve a place in the team.

What’s wrong with these fools, other players who missed out would do anything to be in the squad.

Completely unprofessional, also it's his nation he represents should give his all even to play for 30 seconds.

The manager's decision has been praised by some fans on Twitter.

There's no I in team! #GL Croatia great decision, focus..

Some have even called for Croatia to remove the striker from the team for good and demanded similar steps from his own football club.

Great, he should be banned from representing for his country ever again.

Lol, he's representing his nation ffs and this is what he did, deserves a ban from national team.

Well that's his Milan and NT career over, i even expect Gattuso to kick him from the team figurative and physically