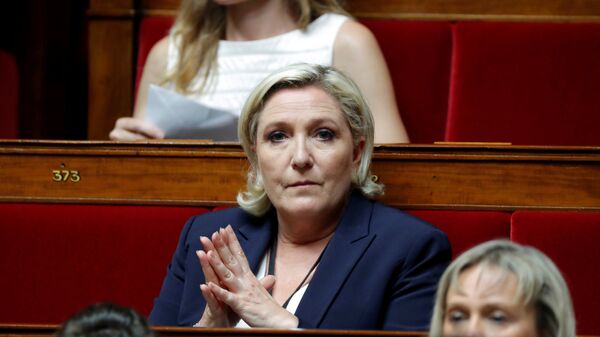 According to the French politician, the US economic policies should set an example for France, whose external trade deficit with Germany is estimated at over 17 billion euros.

READ MORE: Beijing Has Not Yet Deployed 'King Card' in Trade Spat With US — China Analyst

"The US stands on guard of its won national interests, they have a deficit in [their] external trade balance with China of about 350 billion dollars, and Donald Trump is poised to reduce it by 100 billion," Le Pen remarked. The right-wing politician called on the French government to take similar steps with regard to Germany, citing the EU’s "inability to find appropriate solutions, be it Italy or France," she stressed.

China's Tariffs on E-Cars, Whiskey, Soya Designed to Penalize US 'Provocateur'
Professor Gilles Lebreton, a French member of the Europe of Nations and Freedom Group (ENF) at the European Parliament, has said that the French government will hardly impose duties on Germany, despite there being a certain logic in Marine Le Pen's proposals.

"The era of unbridled ultra-liberalism and wild globalism is over! Trump has understood this, as has Marine Le Pen," Lebreton said. "This could raise protests from Germany, even retaliatory measures, but France's trade deficit is such that it has little to lose. Germany has built its hegemony on the euro-mark, which has led to the deindustrialization of France: it must now accept reciprocity. The likelihood that President Macron and his government will take this proposal into account is close to zero."

US President Trump recently announced a new round of 25 percent tariffs targeting as much as $50 billion worth of products manufactured in China using "industrially significant technologies." Earlier in the day, however, Trump, who is essentially delivering on his 2016 campaign promises, emphasized his "great friendship with President Xi of China," but cited historically unfair trade between the two countries. In a tit-for-tat move, Beijing responded by slapping a similar set of tariffs on US products, with US electric cars, soya and whiskey expected to be hit hardest.