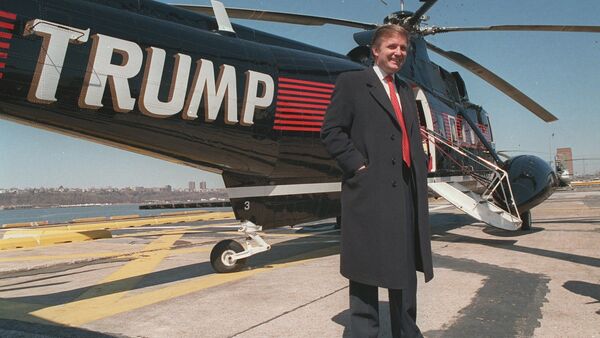 Amid the increasingly tense standoff on trade between the US on one side and China, Canada, Mexico, and the European Union on the other, Sputnik decided to dust off an old video providing insight into the logic behind President Trump's trade tug-of-war.

Real estate magnate Donald Trump's 1988 appearance on the Oprah Winfrey Show in April 1988 seems prescient, in that the remarks he made in the interview seem eerily similar to his approach to foreign to trade policy today.

Asked to explain what he was trying to say in his full-page ad "There's nothing wrong with America's Foreign Defense Policy that a little backbone can't cure," which Trump took out in the New York Times, the Washington Post, and the Boston Globe in 1987, the businessman responded that he'd "make our allies, forgetting about the enemies, the enemies you can't talk to so easily – I'd make our allies pay their fair share. Something's going to happen over the next number of years with this country, because you can't keep going on losing $200 billion [on the trade deficit]."

"…We let Japan come in and dump everything into our markets. It's not free trade. If you ever go to Japan right now and try to sell something, forget about it. Just forget about it. It's almost impossible. They don't have laws against it, they just make it impossible. They come over here, they sell their cars, their VCRs, they knock the hell out of our companies. And hey, I have tremendous respect for the Japanese people. I mean you can respect somebody that's beating the hell out of you, but they are beating the hell out of this country."

Beijing Has Not Yet Deployed 'King Card' in Trade Spat With US – China Analyst
Asked whether he was considering a presidential bid, the businessman answered: "I probably wouldn't do it Oprah, but I do get tired of seeing what's happening with this country…how we're really making other people live like kings and we're not."

Finally, with the same cocky sense of confidence he became known for during the 2016 campaign, Trump said that if he ran, he'd win. "Well I don't know, I think I'd win. I don't go in to lose. I've never gone in to lose in my life," Trump said.

Last week, Washington and Beijing vowed to introduce $50 billion in new tariffs against one another, with Trump threatening to act in "response to unfair trade practices." The spat follows last week's tense G7 summit, where the US president faced off against US allies in Canada and Europe over US tariffs on steel and aluminum and left without signing the summit's communique.