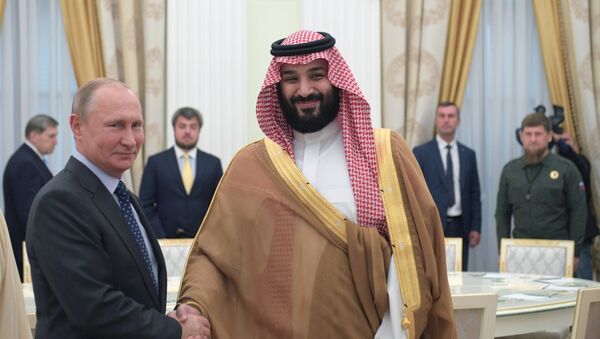 © Sputnik / Alexei Druzhinin
/
Go to the photo bank
Subscribe
Even as the Saudi football team suffered a major defeat at the World Cup in Russia, Moscow and Riyadh played a different kind of “game”: by working out mutually beneficial mechanisms for controlling the global oil markets, according to a Russian analyst.

Russia and Saudi Arabia have de facto accepted responsibility for the stability of the global oil market by working out an agreement which may pave the way for a new global oil market and oil price regulation mechanisms, Russian analyst Dmitry Lekuh said.

Saudi Arabia Wants to Continue Oil Cooperation With Russia - Crown Prince
According to the official reports cited by Lekuh, Moscow and Riyadh intend to "support oil and natural gas as the key elements of the global energy balance."

"This means that the concerted efforts of the OPEC oil cartel, which is regulated first and foremost by the Saudis, and the group of independent oil producing countries led by Russia proved their effectiveness in terms of coordinated actions on global markets. And if this global control mechanism is working, there’s no reason to alter it or get rid of it even as things have finally stabilized," the analyst said.

He noted that Russia and Saudi Arabia intend to offer other oil producing countries — including Canada, Mexico, Kazakhstan and the US – the opportunity to join the global oil production curbing agreement.

"Of course, no one is going to force them to join. It’s worth mentioning, though, that the combined oil production capacity of Riyadh and Moscow is enough to regulate the global markets purely for the sake of their own interests and not just for everyone’s benefit," Lekuh remarked, adding that "under certain circumstances" oil prices can fall just as well as they can rise.

As he explained, this extension may allow this "powerful organization with a more formalized coordination center" to manipulate the market more efficiently and to affect both oil and natural gas prices.

Lekuh also added that Moscow and Riyadh also take a dim view of the “paper oil” speculations on stock exchanges, and will likely move to address this issue together with other oil-producing countries.

"It is unclear exactly how it will be done, as Saudi Arabia and Russia have, so far, merely ‘agreed to make the next step.’ But what’s important is that they declared their willingness to ‘accept responsibility for the markets’ stability’," Lekuh surmised.

Earlier, Russian Energy Minister Alexander Novak announced that Moscow and Riyadh have agreed to jointly support the prolongation of the OPEC+ deal, aimed at curbing global oil production, and to discuss framework principles for further cooperation between OPEC and non-OPEC states.

The views and opinions expressed by Dmitry Lekuh are those of the speaker and do not necessarily reflect the position of Sputnik.