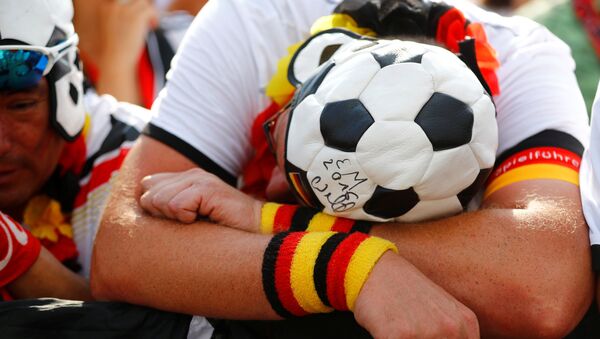 © REUTERS / Hannibal Hanschke
Subscribe
Germany, the defending champion of the 2014 FIFA World Cup, has been beaten 1-0 by Mexico, Germany's first opening-match defeat at the tournament since 1986.

Mexico has beaten the German national team, with the only goal of the match scored by Mexico winger Hirving Lozano in the 35th minute.

Germany fought hard, but still lacked the accuracy to score even though it had a number of chances.

In the wake of the game, German fans took to social media not only to express their frustration but also to try to explain their team's poor performance.

Some internet users have assumed that the bundesteam, how the German squad is often dubbed, lacked team spirit and coordination.

TWEET: Germany was lacking everything: emotional strength, passion and the will to win. It was a group made up of individual players but not a team. Stupid Low kicked!

Many twitter users also jokingly drew parallels between Nazi Germany's failure at the Battle of Moscow during World War II and today's defeat from Mexico at Moscow's Luzhniki Stadium.

TWEET: Germany, aren't you tired of losing on the Russian soil? You should use the same tactics as was used at the last Cup!!

However, plenty of tweets point to the fact that the national team's overthrow boosted German discontent over the country's government policy concerning migration and sparked an angry reaction and bitter resentment against the ruling politicians.

TWEET: Low [Germany's head coach Joachim Low] has almost the same hairstyle as Merkel… Is it a coincidence, or do both want to downgrade Germany…?!

TWEET: 0:1 against Mexico, did the team want to make a political statement this way? It had little to do with football.

TWEET: After GERMEX [Match between Germany and Mexico] tomorrow comes a defining day for Germany. Will Seehofer [German Interior Minister Horst Seehofer] finally manage to advance his agenda or the row over migrants will become the next defeat for Germany?

Some Mexican supporters have mocked a headline that had been circulated in the media ahead of the game: "Sorry, Mexico. Heute bauen WIR die Mauer!" [Translation: Sorry, Mexico. Today WE are building the wall], an obvious reference to US President Donald Trump's threats to construct a wall on the US-Mexico border to prevent the influx of migrants.

Nevertheless, there are those who remain optimistic ahead of the upcoming group matches. The German government's spokesperson, Steffen Seibert, also stepped in and encouraged the team to fight further.

TWEET: OK, fell down. Tomorrow, get up, shake it off, keep fighting. We stand by you.

TWEET: At least, after kick-off defeat of 1982 Germany made it into the final

Germany is due to play Sweden in Sochi on June 23 and South Korea in Kazan on June 27 as part of Group F.