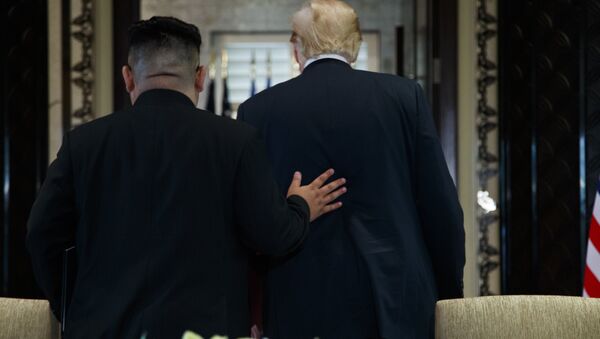 Promoted by both countries as the most significant historical event in modern times, the recent summit between DPRK leader Kim Jong-Un and US President Donald Trump has left observers, experts and governments scratching their heads and looking for facts behind the flash.

'Don Jong-un?' Trump Admires How People Sit up at Attention When Kim Speaks
A document signed by both leaders and released after the June 12th summit in Singapore was notable according to observers for what it did not say and disappointing for its lack of details and concessions from the People's Democratic Republic of Korea (DPRK).

Although both sides committed "to build a lasting and stable peace regime on the Korean Peninsula" bolstered by Trump promises for "security guarantees" to Pyongyang, facts to back up the frothy proclamations were almost nonexistent.

Tellingly, a precise definition for the denuclearization of the Korean peninsula — ostensibly including both the DPRK and South Korea — was not provided.

In the past, Pyongyang's offers to disarm included not only the demand that Seoul do the same, but also required the complete withdrawal of all US military assets from the peninsula. There is no straightforward indication that this policy has changed, according to reports.

Many suggested that the summit accomplished very little in the way of real-world results.

"If Hillary Clinton were president of the United States and had come up with yesterday's agreement, Donald Trump would have rightly attacked her for a ‘fake' denuclearization," stated Korean political expert Yoichi Funabashi, former editor of Japan's Asahi Shimbun, cited by the Economist.

"The word ‘denuclearization,' [as used in the text of the official summit document] is so elusive, it does not mean anything," Funabashi pointed out.

Trump's career as a reality TV personality is said to have contributed significantly to the glitz and glamour but lack of substance surrounding the historic summit with Kim according to reports, particularly as an estimated 2,500 reporters were the primary physical audience for the made-for-TV spectacular.

Kim — reportedly awed by the technological and financial panoply on display in Singapore — at one point during the summit observed to Trump that the pomp surrounding the event could serve as the plot of "a fantasy," cited by The Guardian.

The DPRK leader and his regime are notorious both for having the world's worst human-rights record and for employing the most brutal security forces on the planet, according to the Economist.

World
Pyongyang's Commitment to Denuclearization Good But Should Be Verified - Paris

A recent United Nations estimate counted some 120,000 DPRK citizens — including entire families — placed in labor camps for life, while uncounted numbers of children do not receive enough food and are as a result mentally deficient, according to UN reports.

Although ten UN Security Council resolutions have been declared against Kim and his unremittingly repressive regime, the Trump White House has floated the idea of the DPRK leader's attendance at the UN General Assembly in New York prior to the end of the year.

Trump went so far as to suggest that Kim could be a guest at the White House in the near future.

But for US allies the most disturbing aspect of the summit's outcome in the region could be the president's off-the-cuff avowal that Pentagon defense assets stationed in the region over decades would be removed.

Trump astonished observers, allies and members of his own cabinet by declaring that joint US-South Korean military exercises in the region were "very provocative," a phrase typically trotted out by Beijing and Pyongyang when responding to American military movements.

The US president also suggested that ongoing long-term military training exercises in Asia between the US and its allies were "inappropriate" during the negotiations.

"We will be stopping the war games, which will save us a tremendous amount of money," Trump stated, cited by The New York Times.

An enormous concession by a US president — and one apparently made without involving the input of anyone within his administration — the statement quickly raised red flags in Tokyo and Seoul, who had no prior warning of the move.

World
Didn’t See That Coming: China Threat of New Crude Oil Tariff a Surprise in US

Significantly, the US military command in Seoul — reacting to South Korean alarm — sought to calm local fears by announcing that joint military exercises between the longstanding allies would continue until official orders are revised.

Observers noted that Trump's seemingly offhand remarks about the legacy military exercises between Washington and Seoul were unnecessary and potentially damaging to his cause.

"Without those [joint military exercise] comments, [Trump] could have sold the summit as a political success," commented East Asian security expert Janka Oertel with the German Marshall Fund.

"But alienating his allies in that way could do serious harm," noted Oertel, adding, "It is also a massive gift to China."