Rise Against Machine: Twitter Afire as France Beats Australia Due to VAR System 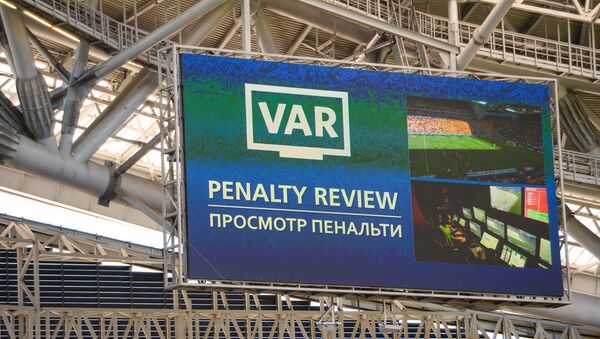 The Kazan Arena in Russia has witnessed the first use of the VAR (video assistant referee) system in the World Cup's history.

Today’s game between France and Australia featured two penalties. Griezmann scored in France’s favor after the referee reviewed the original penalty decision with the help of the automated system, put in place for the first time at a World Cup match.

Minutes later, Australia scored a clear penalty, but with nine minutes left to the final whistle, a shot by Paul Pogba struck the bar, leading France to a triumphant 2:1 victory. The dynamic game, however, did not stop fans from claiming that the VAR system had ruined the game. They vented their dissatisfaction on Twitter during the game:

If VAR is going to work, it needs to happen instantly like in so many other sports. Play can’t continue and then be pulled back🤦🏼‍♀️ #WorldCup

VAR has been brought it to clear up mistakes and here we are, three days into the World Cup with debate still raging after it’s been used to give a penalty.

The game is not one of clear but decisions, that’s part of its beauty.

Twitter has literally exploded with memes under the respective hashtag #FRAAUS over the use the VAR system and the match's outcome.

Users vigorously engaged in speculations over the lack of effectiveness the automatic referee system might demonstrate:

Better than the game, for most of it… #FRAAUS pic.twitter.com/PbYTFGJkt8

First appearance of 8bit VAR in the #WorldCup. #FRAAUS pic.twitter.com/nkytd2rNUo

Some joked that that there might be human beings behind the VAR system:

🇦🇺 Rumours are this fella is waiting outside the Kazan Arena ready to offer out any Frenchman willing to take him on…#FRAAUS#WorldCup pic.twitter.com/THFfVIr2Ln

Some users joked over Australia potentially taking revenge over the use of the VAR system, which they failed to benefit from, by posting hilarious memes:

Australia fans waiting for the VAR officials after #FRAAUS like pic.twitter.com/9Ceqqpwwru

Hordes of Twitter users opted for video memes, ironically speculating on the typical posture and gestures of French defender Hernandez throughout the game against the Aussies. In one Tweet his prototype just falls down of the floor unconscious, while another one alludes to Hernandez, instinctively flying several meters before landing on the ground:

Exclusive footage of #FRA defender Hernandez any time an Aussie gets near him #FRAAUS pic.twitter.com/vf8XIPkgr4

You haven’t seen the best of Paul Pogba yet, this is not the Manchester United Pogba that we all know.