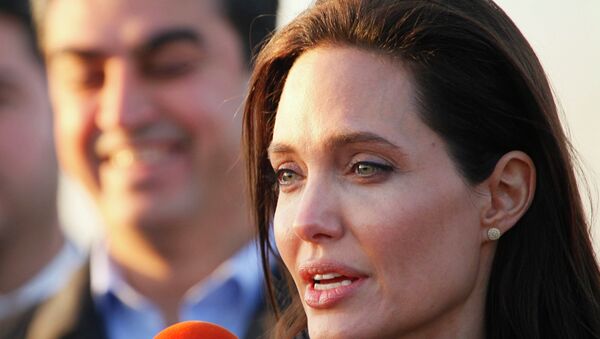 Angelina Jolie urged the international community not to forget Mosul and its people nearly a year after the city was freed from Daesh militants.

As a special envoy to the United Nations Refugee Agency (UNHCR), Angelina Jolie toured on Saturday the bomb-shattered streets of Mosul, which was recently liberated from Daesh*, and met with displaced Iraqi families.

"This is the worst devastation I have seen in all my years working with UNHCR. People here have lost everything," the Hollywood star was cited as saying.

Separately, while on her humanitarian mission, Jolie made it to the ruins of the destroyed Grand al-Nuri Mosque, according to a UNHCR statement. It was there that Daesh leader Abu Bakr al-Baghdadi declared the creation of the caliphate in 2014. Iraqi forces and the Daesh jihadists clashed in tremendously fierce fighting for the ancient historic site back in spring and summer 2017, during the Iraqi liberation campaign, three years after the Daesh militants occupied a number of regions across the country. After a lengthy operation, Mosul was finally liberated, along with a number of smaller Daesh strongholds.

Speaking to Sputnik in May, former Iraqi Defense Minister Khaled al-Obeidi stated that the reconstruction of the ruined Iraqi city hadn’t yet kicked off, despite the international community’s lofty promises.

*Daesh is a terrorist organization banned in Russia.