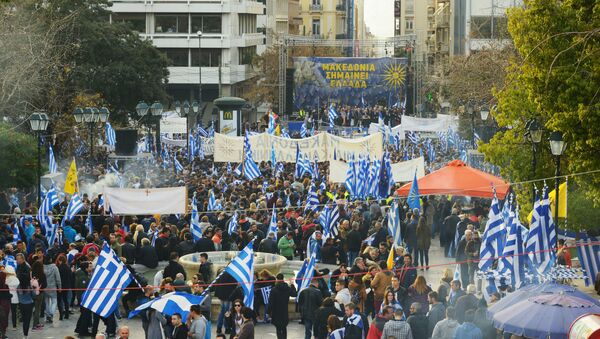 ATHENS (Sputnik) - Greek police used tear gas in the center of Athens against the group of protesters who tried to break into the parliament, the Athens news agency AMNA reported Saturday.

Several dozen people protesting against the agreement on the new constitutional name with the former Yugoslav Republic of Macedonia tried to climb up the stairs to the parliament building in Syntagma Square, and the police used gas to stop them, the agency reported.

According to media reports, only a few hundred people participate in the rally. People came with Greek flags and slogans "Macedonia is Greece" and "Hands off our history."

Hundreds of demonstrators in #Athens protest outside the Greek parliament on Friday 15 June, against the agreement with FYROM to call itself “Northern #Macedonia ". They say that protests will escalate on Saturday. #Σκοπιανo #skopiano pic.twitter.com/NO1X45ZEfE

The rally began shortly before the vote of no confidence in the government of Alexis Tsipras initiated by the leader of the opposition New Democracy party Kyriakos Mitsotakis. According to Mitsotakis, the agreement harms national interests and is not unilaterally supported within the government. Defense Minister Panos Kammenos and his faction ANEL said that they would not vote for ratification of the agreement.

June 15, 2018 — Athens, Attica, Greece — Demonstration burn flag as they protest against the agreement between Greece and FYROM, outside the Greek Parliament. The agreement seems to resolve a 27-year problem over the name of the former Yugoslav republic. (ZUMA Press) pic.twitter.com/FacBSxauKo

​On Tuesday, Macedonian Prime Minister Zoran Zaev said that he had reached a deal with Greek Prime Minister Alexis Tsipras on the decades-long name issue, agreeing that Macedonia would be named the Republic of North Macedonia, or Severna Makedonija in Macedonian.

Macedonia gained independence from Yugoslavia in 1991. Athens has been in dispute with the country over its name, claiming that Macedonia might have territorial claims to Greece’s own region of the same name.

In the 1995 interim bilateral accord, Greece agreed that the term former Yugoslav Republic of Macedonia (FYROM) would be applied to Macedonia until the dispute was settled.