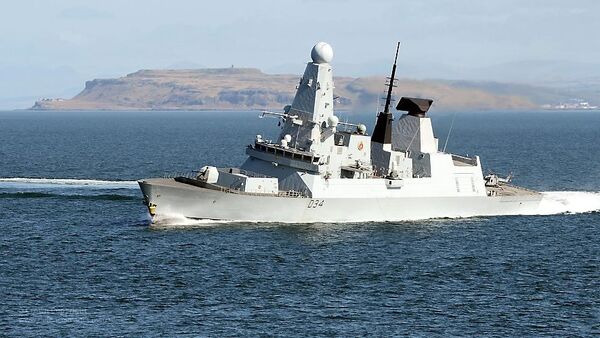 A number of Britain’s top-notch warships ended up spending more time docked than at sea due to their temperature-sensitive engines.

The six Type 45 guided missile destroyers which comprise “the backbone of the Royal Navy” spent the majority of 2017 at the dock awaiting an expensive refit, which is only expected to begin in 2020, The Daily Mail reports.

"HMS Dragon spent 309 days in Portsmouth last year, followed by HMS Daring with 232 days and HMS Diamond with 203. HMS Duncan spent the most time at sea, but was still in dock for 197 days. From January to March this year, HMS Daring, HMS Dauntless and HMS Defender have not left port," the newspaper stated.

Rolls-Royce reportedly insists that the British Ministry of Defense did not inform the company about the fact that the destroyers would have to operate in warm waters for prolonged periods of time, so the ships’ engines simply weren’t designed to operate in the heat.

The ministry intends to rectify this issue by fitting the vessels with extra diesel generators, with the installation procedure possibly requiring work crews to cut giant holes in the ships’ hulls, The Daily Mail adds.

Earlier in May, UK Defense Secretary Gavin Williamson called upon the British government to increase funding for the Royal Navy's modernization in order to counter the alleged "Russian threat."

The UK Conservative Party also pushes for the renewal of the country’s nuclear deterrent despite the considerable upkeep it requires.

According to IMF projections, the estimated cost of this undertaking would be about $244 billion over the 32-year lifespan of the system, between 2028 and 2060.