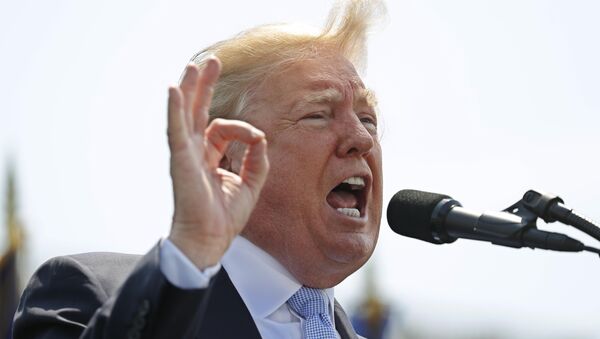 US President Donald Trump has long called on other NATO members to contribute their fair share of the military bloc’s budget to end overreliance on Washington for funding.

Trump is pressuring the UK to financially contribute more to NATO despite it already meeting the specified military spending target of two percent of GDP, The Times reported, citing a “senior source.”

The move is part of the Trump administration’s plan to get European NATO members to increase their defense spending, and senior officials in Washington are hoping that Britain – as the US’ closest ally – will set a good example for the rest of the continent.

“They will want the prime minister to be able to give a very clear direction of what the UK is bringing to the table. There is a feeling that the Americans expect more from the UK as a partner of choice,” a UK government source told The Times.

As of March 2018, most EU member states were still spending less than two percent of their respective GDPs on their armed forces. The UK, alongside Greece and Estonia, are some of just a handful of European countries to meet NATO’s spending target.

Trump has been very vocal on the matter, and posted a scathing tweet over the weekend insisting that “change is coming!”

Another government source told The Times that Britain’s spending plans will be a determinant of the UK’s post-Brexit presence and role in the international arena.

“We are facing a profound moment for Britain and its place in the world and signaling whether or not post-Brexit we are going to be an ambitious, leading nation or one that is going in retreat.

UK Chancellor of the Exchequer Phillip Hammond will meet with British Defense Minister Gavin Williamson next week to discuss plans to modernize the country’s armed forces.

Greater Inequality Leading to Surging UK Crime Stats – London Police Chief
With police forces throughout the UK underfunded as part of Tory budget cuts – arguably driving the ongoing crime surge – and the NHS equally underfunded and facing growing demand, Phillip Hammond will be wary of spending “too much” taxpayer money on defense.

Trump is likely to directly pressure UK Prime Minister Theresa May to contribute more to NATO in July during his first official visit to Britain.