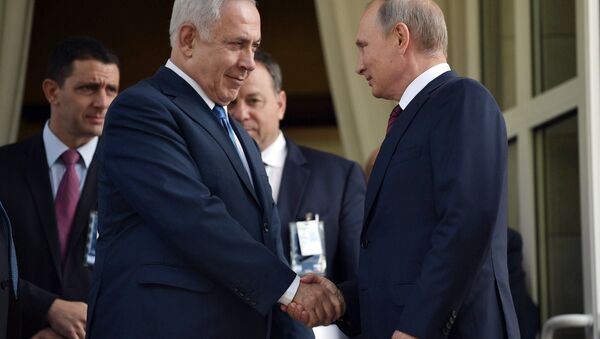 TEL AVIV (Sputnik) - Israeli Prime Minister Benjamin Netanyahu congratulated Russian President Vladimir Putin on Russia Day and on the fact that the Russian Embassy in Israel hosted its first official event in Jerusalem, the press service of the Israeli leader said in a Friday statement.

"Prime Minister Netanyahu congratulated President Putin on the occasion of Russia Day and the decision to hold an official event at Sergei's Courtyard in Jerusalem, and also on the opening of the World Cup in Russia," the press service said on its Facebook account after phone talks between Putin and Netanyahu.

The two politicians also touched on bilateral issues and the settlement of the Syrian conflict.

Sergei's Courtyard is a house built in the 19th century to host Russian pilgrims visiting Jerusalem. Russia recently regained control over it and opened it in 2017 after it was renovated.

Netanyahu in Talks With Putin: 'Iran Threatens Israel'
Russian diplomats stressed that the fact the reception was held in Jerusalem had nothing to do with the status of the city, considered as the capital both by Palestine and Israel. They went on to state that Sergei's Courtyard was located in West Jerusalem, recognized by Russia as the capital of Israel in April 2017, while Moscow recognized East Jerusalem as the capital of the Palestinian state.

On Tuesday, Russians marked the anniversary of their country's declaration of state sovereignty. On Thursday, the staff of the Russian Embassy in Israel organized a reception dedicated to the holiday. The event was held in Jerusalem, breaking with the tradition of holding such an official event in one of the hotels in Tel Aviv. Netanyahu and his wife attended the ceremony.