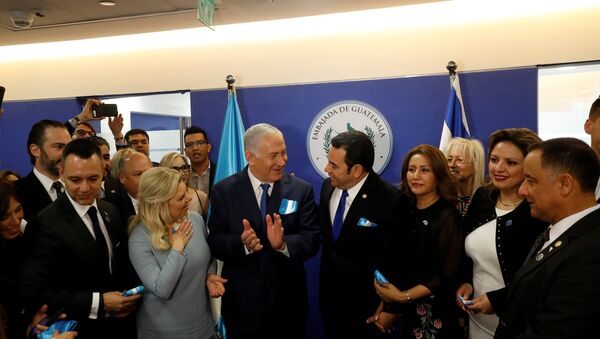 Czech President Milos Zeman has been supporting the idea of relocating his country's embassy from Tel Aviv to Jerusalem for "years," according to the official website of the Czech presidency.

Czech President Milos Zeman stated that Israeli Prime Minister Benjamin Netanyahu had offered to give his own house in Jerusalem if the Czech Republic relocated its embassy there.

"That's not all, Bibi Netanyahu told me: ‘If you do [the same] I will give you my own house for your embassy,'" Zeman said, adding, "I strongly hope that the offer is still valid because it could greatly reduce the cost of this relocation," Zeman stated during a speech last week at a gala of the American Israel Public Affairs Committee.

Earlier, Israel's Channel 10 reported that Israel had been urging the Czech Republic to move its embassy from Tel Aviv to Jerusalem following the recent relocation of the US Embassy.

Turkish Foreign Minister Calls Relocation of US Embassy to Jerusalem Provocation
In May 2017, Guatemala's embassy was officially opened in Jerusalem after the relocation of its operations from Tel Aviv. A few days later, Paraguay held an opening ceremony for its embassy in Jerusalem, which was attended by the country's President Horacio Cartes and Israeli Prime Minister Benjamin Netanyahu.

Donald Trump's move was met with widespread indignation throughout the Arab world, sparking unrest across the Middle East, with people taking to the streets to protest the move.

Israel considers Jerusalem its capital, including the eastern districts of the city, which the Israelis seized from Jordan during the Six-Day War in 1967. The international community does not recognize the annexation of East Jerusalem and claims that the status of the city should be determined according to an agreement with the Palestinians.