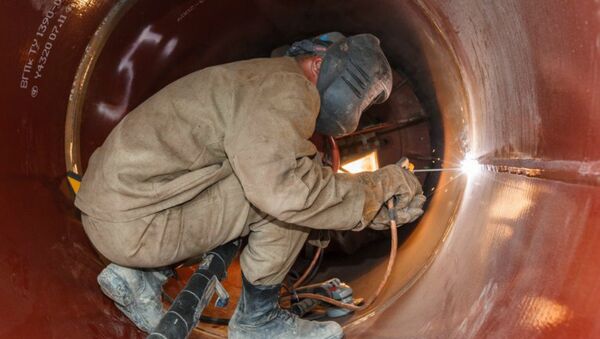 The Russian gas giant's announcement comes in the wake of the recent warming of relations between Seoul and Pyongyang, and a general cooling of tensions in the region.

"The political situation at the moment is now somewhat different, and the South Korean side has appealed to Gazprom regarding the resumption of this project," Gazprom board of directors deputy head Vitaly Markelov told reporters.

"A series of negotiations has been conducted on this issue, and negotiations are continuing," Markelov added.

The idea of a Russian gas pipeline crossing the Korean Peninsula first appeared in 2008, when Gazprom and Korea Gas Corporation signed a memorandum of understanding on the delivery of gas supplies from the Sakhalin-Khabarovsk-Vladivostok pipeline to South Korea, with 700 km of the proposed 1,100 km pipeline passing through North Korea. The pipeline would have had a capacity of about 20 billion cubic meters per year, with deliveries divided between North and South Korea.

Pipeline of Peace: How Russian Gas Could Soothe Tensions in the Korean Peninsula
A deterioration of relations between Seoul and Pyongyang froze the project. However, following meetings between North Korean leader Kim Jong-un and South Korean President Moon Jae-in in April, and the summit between Kim and President Trump this week, prospects for cooperation have returned.

In recent years, the two countries have also discussed the prospect of constructing an energy bridge that would see Russian electricity flowing south. That project too was put on hold amid a deteriorating security situation in the region.