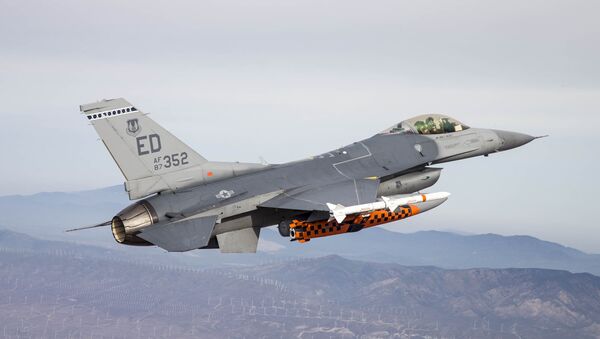 © U.S. Air Force photo by Christopher Okula
Subscribe
The US and Norway have completed testing their new air-launched, long-range Joint Strike Missile just two weeks after the US Navy announced that it would adopt a naval version of the Norwegian missile.

On June 1, the US Navy announced that it had selected Kongsberg Gruppen's Naval Strike Missile (NSM) as its official new long-range attack missile. The Norwegian NSM, which is produced jointly with Raytheon, beat Lockheed Martin's Long-Range Anti-Ship Missile (LRASM) and Boeing's advanced Harpoon to win the contract to supply missiles to the Navy. In May 2017, Lockheed and Boeing dropped their bids to compete for the contract out of frustration of what they felt were requirements that skewed toward Norway's JSM, Defense News reported.

Before testing the JSM from an F-35, military engineers and pilots determined it was most prudent to test the JSM from an F-16 first. According to Collin Drake, a JSM project engineer, "the F-35 is still undergoing its own technology development and design iterations, which brings its own challenges." The F-16 Falcon has no internal weapons bay, as the F-35 does, and so deploying new weapons on it is much easier, even though the US Navy doesn't use any F-16s in combat.

Testing the weapon from an F-16 "made it a lot more efficient and effective… to be able to test, mid-cycle, a new type of weapon," Drake noted.