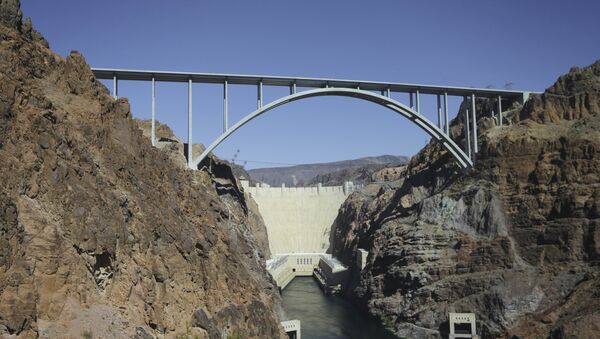 The man inside the vehicle was said to be writing messages and showing them through the windows of the vehicle, according to witnesses on social media. ​It is not clear what was written on the notes, though a local CBS News affiliate reported that one of the notes said to release unredacted inspector general reports on the FBI's conduct in the 2016 elections.

"You can't get away from politics," remarked Columbia Journalism School director of alumni relations Maria Newman.

Here's how visitors at the #HooverDam are reacting to the barricade situation. @newmaria's tweet was in response to the suspect's note on the windows of the armored vehicle blocking the lanes. One note said release the #IGReport. https://t.co/ky3NAKxtWG

​​Police arrived on the scene about 15 minutes following the blockade of the bridge. About 45 minutes after police responded, the man was "taken into custody without incident," the Nevada Highway Patrol's Southern Command said on Twitter. The man was arrested by Arizona police.

TRAFFIC ALERT: Numerous law enforcement units from Nev. & Arizona have responded to reports of a person with a gun at #HooverDam.
Traffic is backed up at
due to the possible suspect's vehicle blocking lanes. There are reports that the person in the vehicle has a gun. #8NN pic.twitter.com/vUMCCap1sN

​US Highway 93 was closed in both directions. The road was re-opened after the person was detained.

The man was wearing a mask and carrying a machine gun while barricaded inside the vehicle, Metro Police Officer Jay Rivera tells the Las Vegas Sun.

#UPDATE: In a photo sent to 8 News NOW from Keith Aronson, the suspect has notes taped to the window of the vehicle he's barricaded in. One note says "Mr. President release the reports," according to a passerby. #HooverDam #8NN pic.twitter.com/hjE0LO8iCw