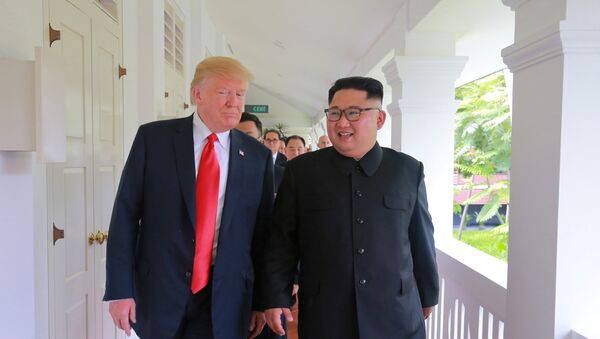 On the heels of his historic summit with Kim Jon-un, President Trump declared this week that DPRK no longer poses an existential nuclear threat. Trump’s proclamation has been met with applause in some political quarters, and suspicion in others. Sputnik spoke to Andrew Leung, an international and independent China strategist, to get to the facts.

Sputnik: As both Democrat and Republican critics have argues that President Trump offered Kim Jon-un too many concessions, Mr Trump himself has said that North Korea “no longer poses a nuclear threat” – how much truth is in that assessment do you think?

Andrew Leung: I think that this needs to be looked at in the context of a conference of wants at this particular juncture. I think both sides see that this is a good moment for a game changer. For Trump he sees that the mid-term elections coming up and he wants to have a big thing too sure for his mid-term, and also prop up his prospects for re-election, also possibly a Nobel peace prize.

I think that he’s no fool; he knows that the North Koreans are not going to give up all of his nuclear insurance policy, all at once. So, he now changes his rhetoric to acceptance of a gradual process. A gradual process means long enough for him to show a gradual progress by this critical juncture, i.e. the mid-term elections and further on because even he admitted that it would take something like two years, two and a half years, if not longer to have a meaningful denuclearisation. Now as far as Kim is concerned, obviously why should he trust the United States?

Why should he trust Trump? After all Trump has just torn up the deal with Iran and if you look at the past US administrations, it’s not the first time the US has changed sides or changed strategy from one president to the next. So obviously having worked so hard to secure his insurance policy, the capability of developing long distance ICBMs capable of a nuclear strike on the US homeland, that’s his insurance policy, and he’s unlikely to give it all up.

On the other hand, he must show faith, he must show kind of verifiable results, but how’s he going to do it? Obviously all of his nuclear weapons, and his arsenal, are hidden all over the place. Now when it comes to the crunch, the US negotiators, those experts, are going to want first of all, a concrete laundry list, of where his missiles are, so he’s likely to come and say ‘here it is,’ and that’s all. But how is that going to be verified? You can’t just roam around the entire country looking in every nook and corner and cave, if Kim says that’s all of them, then that’s all. Somehow that has to be accepted.

So I think even after this laundry list has eventually been produced it would take a long time to inspect these things so I think that they’re going to take a long long time, but over that period the world will see that there’s a thawing of relations; they’re going to see a warming up of relationships between North and South Korea, and then there will be a more peaceful environment. So I think that it’s likely to be accepted as a historic moment, and it’s likely to be a game changer, so if it satisfies Trump, then it satisfies Kim, but whether or not we’re going to see a completely denuclearised North Korea, that’s a moot point.

World
Classified Israeli Report Hints Trump-Kim Summit a Glorified Photo Op
Sputnik: Of course, as part of a goodwill gesture, President Trump has said that he will cease military drills with South Korea. This seems to have caused some concern in the Asia Pacific amongst US allies, especially Japan, whose senior vice foreign minister said that: “frankly speaking, I’m stunned. This is going to affect Japan’s security significantly.” — considering that Japan has been slowly remilitarising since the second world war, could we see an explosion in their military spending perhaps due to feelings of insecurity?

Andrew Leung: Well I think we all know how Trump treats his US allies. I mean he doesn’t believe allies very much. At best, they’re a help if it helps his agenda of America First; when he feels that they’re less useful in his, he’s attacking them or ridiculing them as what happened recently with Canada. As for Japan, of course Japan has its own agenda. Japan in this deal with North Korea feels that its being marginalised, and of course it feels that it has genuine security concerns vis a vis North Korea because even though the North Koreans and dismantling long distance ICBMs capable of striking US homeland, that could be remaining in the North Korean arsenal, missiles that are well capable of striking Japan. But for the United States, that’s of secondary importance, so again, Japan feels marginalised and there’s no surprise that they would drum up this rhetoric about security threats, of course this is of genuine importance to Japan but not at the top of the agenda for the United States.

North Korean TV Airs Documentary on Trump-Kim Summit in Singapore - Reports
Sputnik: France’s Foreign Minister, Jean-Yves Le Drian, said that Trump “practically hugged” Kim Jon-un, who he also described as a “dictator.” It seems as if there’s a gulf between Trump’s perception of the summit as a success and that of the US’ traditional allies – how do you think these allies, particularly in Europe, see the outcome of the Trump-Kim meeting?

Andrew Leung: Well if you look at the media, throughout the US allies, not even one, I just can’t even think of one major outlet, saying that this is a tremendous success. There is a healthy dose of doubt, if not ridicule, but on the other hand Trump is going to portray this as a success. As I said at the beginning, over the period of time, say over two years, there’s going to be de-escalation and a thawing of relationship and a more peaceful kind of environment between the two North Koreas and a gradual perception of reduction of risks.

So again, this sits at the heart of it all, if the North Koreans keep something hidden in secret places, they’re not going to use it to swipe neighbours and the United States left, right and centre. So again there are many nuclear states, least of all there are some states that still deny that they have nuclear weapons, when it’s clear as day that they do. I’m referring of course to Israel, and of course China, and Russia and Pakistan and India, so are they going to strike neighbours if they are not being threatened? No. For North Korea it is a good thing for this de-escalation and the thawing of relationship between North Korea and the US. Now let me say that I don’t think that there will be reunification on the peninsula not least because the two systems, and two regions, are entirely different, and the Kim dynasty depends on maintaining this kind of authoritarian regime, so I don’t think that there will be unification. But it’s a good thing for the two peoples to get together, for the economy, and for the North Koreans to be accepted into the global, international and economic community. Indeed there are many other states, communist states, China for example is a very very different regime but of course it’s part of the world economy, so why should not North Korea be? And even Saudi Arabia is an authoritarian state, but it’s part of the world economy. So I think’ it’s a good think in that context.