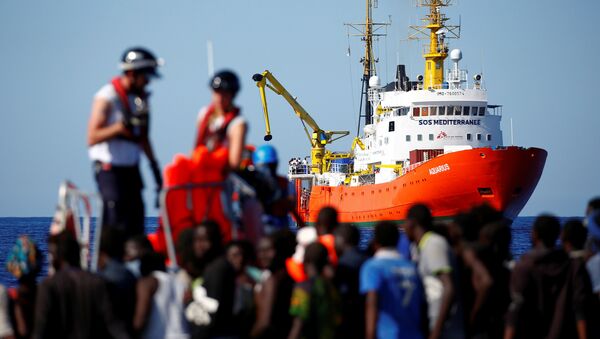 © REUTERS / Tony Gentile/File Photo
Subscribe
MADRID (Sputnik) - By taking in the Aquarius rescue ship with over 600 migrants on board, Spain was fulfilling its obligations as the European country, Spanish Deputy Prime Minister Carmen Calvo said.

"We are acting as a part of Europe… But this is not an issue between Spain and Italy or France, this is Spain's own issue, and an obligation we have to commit to being a part of Europe," Spanish Deputy Prime Minister Carmen Calvo said at a press conference in Valencia aired by the 24 Horas TV channel.

The minister also stressed that this was a humanitarian crisis, and Spain was "sticking to its obligations under international law."

Calvo noted that some of the Aquarius ship migrants, including pregnant women, would be sent to humanitarian aid centers, while the others would be transferred to centers for migrants.

Enough is Enough: What's Behind Salvini's Decision to Deny Entry to Rescue Ship
On June 10, Italy refused to accept Aquarius, carrying migrants rescued in the Mediterranean. French President Emmanuel Macron harshly criticized the decision, angering the Italian side. Rome summoned the French ambassador as a response.

Italy closed its ports to the Aquarius refugees, saying that Malta was the closest and safest port to accommodate the vessel. The Maltese authorities, in turn, said the issue was beyond their jurisdiction and also denied entry to its ports. The Spanish authorities then said they were ready to let the Aquarius dock in its eastern port of Valencia.