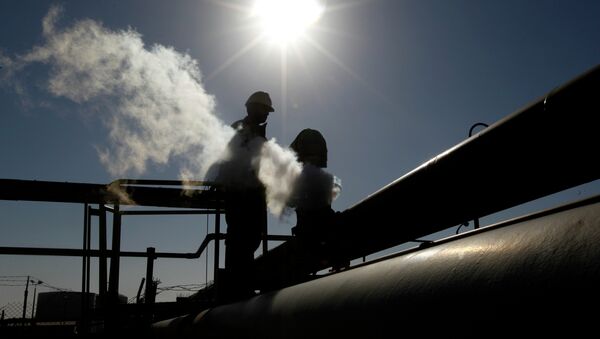 CAIRO (Sputnik) - Libya's National Oil Corporation (NOC) said in a statement that the recent militant attacks on oil terminals in the towns of Sidra and Ras Lanuf resulted in oil output losses of an estimated 240,000 barrels per day (bpd).

"National Oil Corporation has evacuated staff from both Sidra and Ras Lanuf terminals for their safety due to armed clashes in the area. The loss in oil production is around 240,000 bpd and a planned tanker entry today to Sidra has been postponed," the statement said.

According to the statement, NOC is monitoring the developments and stresses the need to bring the people responsible for the attack to justice.

Euro-Priced Iranian Oil Gives US Pretext It Used to Attack Iraq, Libya – Analyst
In 2016, the LNA units drove the militants from the oil terminals controlled by radicals and later handed control over the facilities to the NOC.

Libya has been torn apart by conflict since its long-time leader Muammar Gaddafi was overthrown in 2011. The eastern part of the country is governed by the parliament, backed by the Libyan National Army (LNA) and located in Tobruk.

The UN-backed Government of National Accord (GNA), headed by Prime Minister Fayez Sarraj, operates in the country's west and is headquartered in Tripoli.