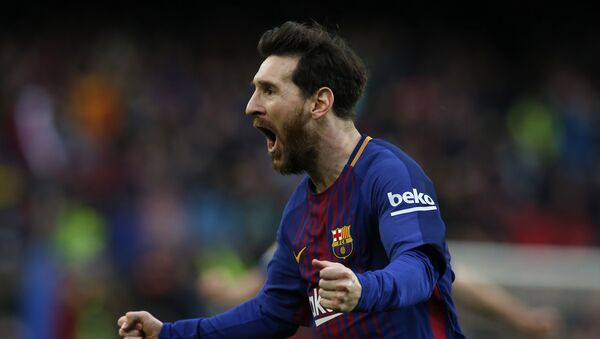 Just as Argentina forward Lionel Messi is in his team’s training camp outside Moscow gearing up for the upcoming World Cup showdowns,his Iranian lookalike is happily handing out autographs to eager aficionados in downtown Moscow.

The unsuspecting fans’ mistake is pretty understandable as Reza Parastesh’s amazing likeness to the Barcelona superstar has made him famous in his native Iran and has won him countless fans around the world.

Each day Reza, who is in Russia to root for his country’s team, goes on Instagram, posting video accounts of his adventures in Moscow.

Including one about the “Iranian Messi” allegedly detained by Moscow police for breaking public order, which immediately went viral on social media.

In fact, mistaking Reza for the Argentine forward, the police officers were trying to calm down the fans who had lined up to get an autograph, blocking traffic.

The officers were all too happy to have a once-in-a-lifetime chance to have a photo-op with a living legend.

“Yesterday Iranians spread the news about me being detained for breaking public order in Moscow. This is not true. What really happened you can see in this video,” Reza wrote on Instagram.

“Football fans from around the world kept coming up asking if they could get a selfie with me, until they blocked traffic. Moscow police officers then politely escorted me to a quiet place near the Kremlin Wall. Exchanging a couple of friendly words with me, they got a selfie and an autograph…” Reza continued, debunking myths about the “no-nonsense” Moscow cops.

Reza is certainly not the only impersonator of football luminaries one can find in Iran. Walking the streets of Iranian cities one can easily stumble upon a Cristiano Ronaldo or a Luis Suarez and have a selfie with them, but Reza Parastesh is the only “Iranian Messi” to make it to the World Cup in Russia.

The 2018 FIFA World Cup will kick off with a grand opening ceremony in Moscow on Thursday, attended by the heads of state and government from 20 countries.

Russia is hosting the World Cup for the first time in history.

The games will be held at 12 stadiums across 11 Russian cities, including Moscow, St. Petersburg, Rostov-on-Don, Sochi, Yekaterinburg, Saransk, Kaliningrad, Nizhny Novgorod, Kazan, Volgograd and Samara from June 14 until July 15.