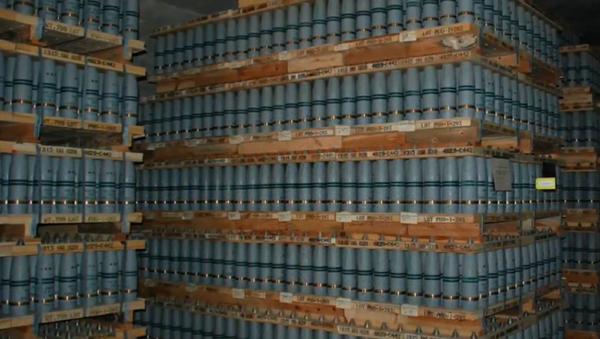 The US Army has relaunched the methodical destruction of 5 million pounds of mustard gas held at a plant designed for that process in Colorado after halting work for nine months to conduct extensive repairs.

Officials announced the resumption of work at the $4.5 billion Pueblo Chemical Depot Wednesday in an interview with Military.com. However, they're not working at full steam yet. Site manager Greg Mohrman said it could be as many as three months before the ‘highly automated' plant becomes fully operational again.

The plant began operations in 2016 but was plagued by a number of safety hazards: one storage tank leaked, a spill containment liner saw a tear, and pipes were vibrating such that they posed a risk to pumps at the site. Work halted in September after some 43,000 shells were disposed of. Since the halting of work at the facility, just 5 percent of the total stockpile there has been destroyed, according to a local media report from February.

Getting the plant back up to speed is "going to be a very methodical process, like when we originally started the plant, to make sure both people and equipment are prepared to move up the production rate," Mohrman said.

Ultimately, the plant will have to dispose of 780,000 mustard gas shells that have been sitting around in storage for decades since the US agreed to get rid of its chemical weapons since former US President Richard Nixon halted production of all chemical weapons on November 25, 1969. The age of the casings presents a number of complications: rust and other solids have contaminated the chemical weapon in a number of shells, which has been a greater problem than officials anticipated, and the rust makes it difficult for the plant's robotic equipment to cleanly open the shells to decommission them.

Once the shells are disassembled, water is used to neutralize the mustard gas. Then microbes are used to eat up the leftover chemicals and produce a "salt cake" that's then put away at a hazardous waste dump.

In March, the US Army announced that they wanted to buy two sealed detonation chambers at a cost of about $30 million apiece to destroy nearly 100,000 shells that are suspected to be the most affected by rust and debris.

While detonation chambers may strike some as a primitive "burn it with fire" method for the destruction of the highly dangerous substance, it's a huge step up from the US' initial method of disposing of its mustard gas stockpiles. Under Operation CHASE, which lasted from 1967 to 1970, the US would load up ships with chemical weapons and then sink them in the deep Atlantic. About 58 million pounds of the noxious weapon were disposed of this way before the US banned dumping it in the ocean in 1972.

Much of the US' chemical weapons stockpile has been destroyed, and seven of nine storage facilities have shuttered. The two remaining are the Pueblo Chemical Depot and the Blue Grass Army Depot in Kentucky. They hold about 10.25 percent of the the US' total chemical weapons as declared in 1997, when the Chemical Weapons Convention arms control treaty signed by the US went into effect.