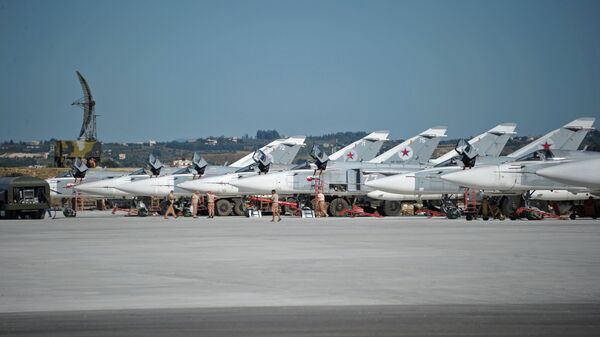 According to the Russian Foreign Ministry fuel supplied to Syria by Sovfracht, which has been hit by Washington's restrictive measures, was intended for Russia's aerospace forces in the country.

"Washington once again demonstrated political recklessness by sanctioning employees of the Russian company Sovfracht for supplying aviation fuel to Syria," the Russian Foreign Ministry said in a statement published on Wednesday.

In addition, the ministry called the US sanctions "a new outrageous attempt to extend US national laws far beyond the borders of the United States," stressing that restrictive measures against Sovfracht are "support for terrorists," since they hit the legitimate Syrian authorities, which "carry the main burden of the struggle in the interests of security in the whole world."

The statement noted that the aviation fuel delivered by Sovfracht was intended for the Russian aerospace forces helping to fight terrorist groups on Syria's soil.

Russia to Respond to US Sanctions Without Additional Legal Procedures - Lawmaker
The Russian Foreign Ministry warned that Washington's "intrusive desire to harm Russia instead of uniting efforts in countering terrorism could be costly for the American people, who have suffered from this evil many times."

The ministry's response comes after the US Justice Department indicted on federal charges at least five Russian nationals, employees of Sovfracht, and three Syrians alleging that they had sent jet fuel and money to Damascus in violation of the US economic sanctions against Syria and Crimea.

Over the past several years, the United States has introduced several rounds of sanctions against Russian individuals and entities over their alleged support for the Syrian government, "interference" in Ukraine's affairs, "meddling" in Western elections and purported malicious cyber activity.

READ MORE: Expansion of US Anti-Russia Sanctions to Be Retaliated — Deputy Foreign Minister

Russia has repeatedly refuted all the accusations and taken retaliatory economic restrictions. On June 4, Russian President Vladimir Putin signed a law on measures to counteract "unfriendly actions of the United States and other foreign countries." The law allows for countermeasures against the United States and its allies, that have introduced anti-Russia sanctions. It also allows for a temporary or definitive end to cooperation with the countries or entities that have engaged in unfriendly actions toward Russia.