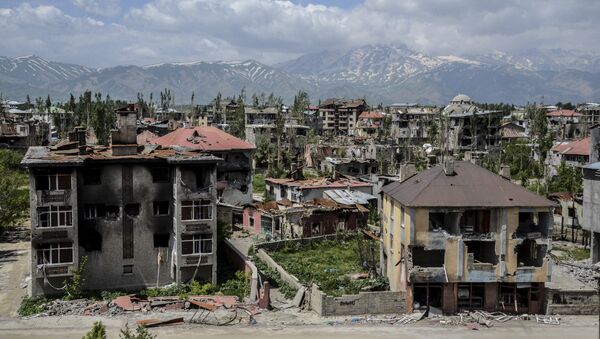 "We maintain contact with Iran on the operation in Qandil [area]. The PKK and the Free Life Party of Kurdistan present a threat for [Iran]. We are stepping up our cooperation with Iran … We are making efforts to liberate the region from the PKK," Cavusoglu said, as quoted by the Haberturk TV channel.

On Monday, Turkish President Recep Tayyip Erdogan said Ankara had launched an offensive in the Qandil Mountains, where the headquarters of the PKK and its Iranian affiliate Free Life Party of Kurdistan (PJAK) is located. The PKK is considered as a terrorist organization by Turkey.

Erdogan has said that 20 Turkish military aircraft are engaged in the operation in the Qandil Mountains.

Ankara Has No Quarrel With Kurds, Afrin Operation Ensuring Security - Deputy PM
On June 5, Cavusoglu said that Ankara had coordinated its ongoing anti-PKK operation with the United States, the Iraqi central government and the government of the northern autonomous region of Iraqi Kurdistan.

The Turkish authorities have been conducting security operations against the PKK across the country and beyond its borders since 2015, when the ceasefire between the government and the group broke.

Earlier this year, Ankara held an offensive against the PKK in the northern Syrian enclave of Afrin dubbed Olive Branch operation.