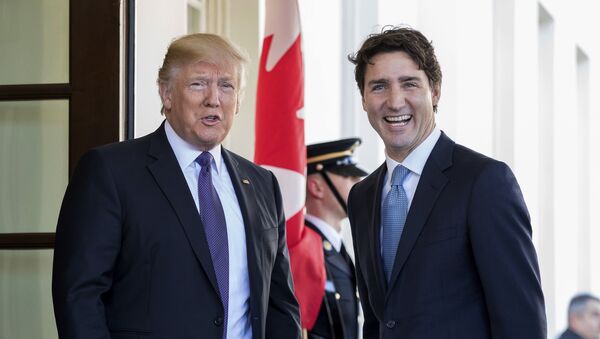 The British parliament is known for not being too serious from time to time, with opposition MPs often trying to leave a UK prime minister puzzled by unorthodox and unexpected questions.

Members of the British parliament were ambushed by a provocative question asked by Tory Crispin Blunt and addressed to UK Prime Minister Theresa May: "Trudeau or Trump?"

Perplexed by the unusual question, the British PM decided to clarify what she had to do with either of them. One MP suggested an option by yelling "Kiss, marry?" Speaker of the parliament, John Bercow, decided to add his two cents by commenting on the question.

It all got a bit Carry on Commons in this evening's G7 debate… pic.twitter.com/zv9u0S4cWu

"If one was being really pedantic, one would have to say that the honorable gentleman's question did not contain a main verb," he said.

This was not the first time an opposition party has tried to leave a British PM perplexed by their questions and suggestions. On Christmas Eve in 2017 MP Clive Efford suggested to Theresa May that she could make a "messy job" of stuffing goose more pleasant, if she named it either Michael or Boris, referring to her fellow Tory MPs Michael Gove and Boris Johnson, who had repeatedly "revolted" against the prime minister that year.