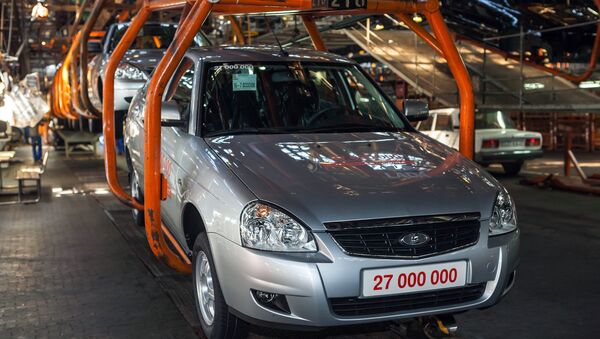 On June 12 US President Trump and DPRK Chairman Kim met during the first-ever summit between sitting leaders of the two countries. They discussed the prospects for denuclearization of the Korean Peninsula and restoration of US-North Korea relations.

The White House has published a video on its Facebook page, which Donald Trump showed Kim Jong-un during the summit. The video was created to show the North Korean leader the prospects for the country's economy if it turns away from isolationism and develops ties with the rest of the world.

READ MORE: How Do You Like This, Elon? Russian Driverless Car Passes Million Km Milestone

As the narrator was speaking about foreign investments and advanced technologies, the video showed an assembly line for cars, strikingly similar to Russian Lada Prioras. Why the authors of the video made for the demonstration picked a Russian automaker over all others remains a mystery.

US President Donald Trump and North Korean leader Kim Jong-un met during the first summit between the two countries on June 12 to discuss the prospects for restoring DPRK's ties with the US and the denuclearization of the Korean Peninsula.

The sides signed joint statement, saying they will strive towards a complete denuclearization of the Korean Peninsula, establish a lasting peace and restore US-DPRK relations. North Korea also promised to organize the retrieval of remains of prisoners of war captured during the Korean War (1950-1953) to send them back to the US.