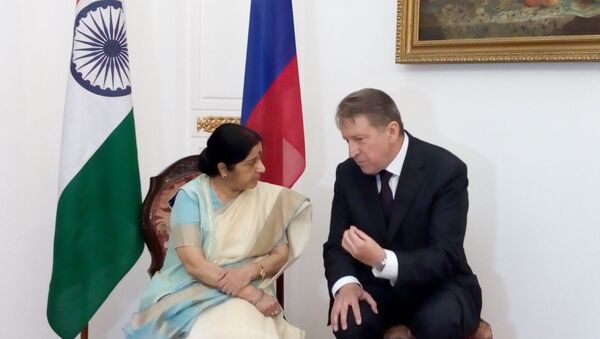 New Delhi (Sputnik) – Indian Foreign Minister Sushma Swaraj has described the relationship between her country and Russia as that of being nurtured by "unmatched reciprocal support." The Indian foreign minister was the chief guest at the Russia Day celebrations on 12 June at the Russian embassy in New Delhi.

"Russia has been a source of strength and success for India in defense, development, and diplomacy. It is not only on the bilateral front, but also in the regional, plurilateral, and global arena that India and Russia coordinate closely and have similar approaches. Rightly called special and privileged, the relationship has greatly benefitted the people of our two countries," read the message by Indian Foreign Minister Sushma Swaraj, congratulating Russia on its national day.

The foreign minister said that India is committed to further strengthening this unique relationship in all facets of engagement.

"Linkages have grown from strength to strength over the years, characterized by unmatched reciprocal support to each other‘s core interests. They have been nurtured by the leadership and the people of both the countries. Sentiments of mutual trust and friendship were visible in the informal summit between our Prime Minister Modi and President Putin in Sochi Last month," the message further read.

Meanwhile, Russian Ambassador to India Nikolay Rishatovich Kudashev told Sputnik in an exclusive interview that the India-Russia partnership has assumed renewed vigor after the meeting between President Putin and Indian Prime Minister in Sochi recently.

"It's a strategic partnership with India, a country where I am lucky to be an ambassador. Very recently we had an informal summit in Sochi where Indian Prime Minister Modi and President Putin met. This reaffirms and revives the commitment of both sides to the special and privileged partnership. The Sochi summit resulted into many new understandings and agreements in politics, defense, economy and culture," Ambassador Nikolay Kudashev said.

Russia Welcomes 400% More Indian Tourists This Summer
The ambassador was of the opinion that the emergence of India and Russia as global powers will strengthen cooperation and security in Eurasia.

"The future of India-Russia relations is bright. The influence of Russia is growing and this is also the case with India. India is more and more introducing itself as a regional power and as a global power and it fits well into our larger Eurasia project where all the countries of Eurasia could develop friendly political and economic cooperation and security for this part of the world which is very much needed," Ambassador Nikolay Kudashev said.

READ MORE: Indians Marvel at Russian Past Through Works of Great Writers

The ambassador also spoke at length about how the evolving international scenario has reinforced the mutual understanding that India and Russia have.

"With the international situation evolving, there is a new atmosphere of mutual understanding, trust and confidence between us.  There are many new elements to it. Elements of certainty as well as elements of uncertainty but the Russia-India connection remains a building block of regional and international relations," the ambassador added. 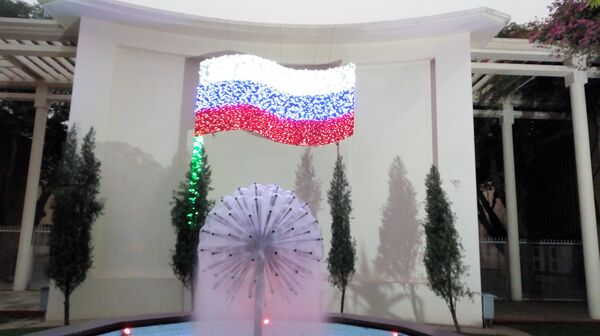 Ambassador Kudashev took the occasion to reiterate Russia's commitment to the concept of a multi-polar world.

"The Russian national day is the re-emergence of Russia as an independent state. Partnering with the international community, Russia remains committed to the principles and values of democracy and a multi-polar world. Non-aggressive commitment to international law is one of the basic pillars of our foreign policy," Ambassador Nikolay Rishatovich Kudashev told Sputnik.

000000
Popular comments
Indian FM is very pragmatic. She fears no one. She goes out of her ways to assist and help even people from India's enemy countries. People from all religion/faith adores her. If she remains the FM for the next one year then India is sure to buy S400. If there is a change of guards then the next incumbent might succumb to the US pressures.