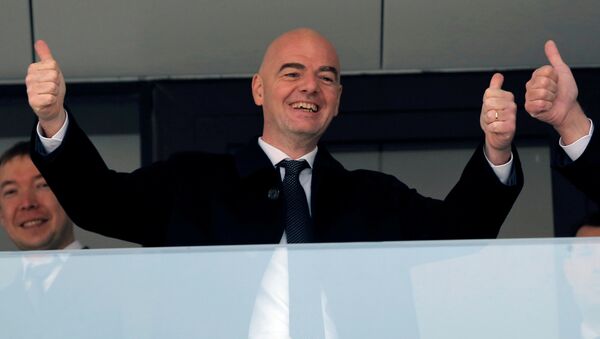 © REUTERS / Maxim Shemetov
Subscribe
International
India
Africa
MOSCOW (Sputnik) - The FIFA revenues for the 2015-2018 cycle will be up to $6.1 billion, FIFA President Gianni Infantino said during the 68th FIFA Congress on Wednesday.

"Someone predicted us God knows what dark days for the future of FIFA in terms of the finances, especially if we were to invest in football development… Our focus is football, we want to develop football. And thanks to this, already at the end of this cycle, which has started in 2015 and which will end in 2018, we know that the original projection and original budget, which was approved by this Congress, which set to see revenues of 5 billion will at the end foresee revenues of over 6.1 billion," Infantino said during the FIFA Congress.

The FIFA president also added that the organization received around 1,800 development projects from all over the world over the past two years, while there were around 700 projects in the previous 20 years.

According to the US newspaper The New York Times, FIFA's revenue from television rights sales was 2 percent more compared to the organization's $3 billion target, and FIFA's sponsorship deals generated $200 million more than the $1.45 billion it had predicted, mainly due to numerous deals with Chinese companies.

The congress started in Moscow on Wednesday morning, a day before the 2018 FIFA World Cup gets underway in the Russian capital.

Continuing his speech, Infantino said that the video assistant referee (VAR) technology had proven "beneficial" for football and would be used at the World Cup in order to help the referees.

Putin Thanks FIFA for Adhering to a 'Sports out of Politics' Approach
"For the first time in a World Cup starting tomorrow VAR… will be used by the referees. We started with tests in March two years ago… and we came to the result that it is beneficial for football and we are brave to decide that it should happen at the World Cup because we need to help the referees," FIFA President stated.

"We cannot accept in 2018 that within a few seconds everyone… knows if the referee has committed a big mistake… And the only one who does not know if he has committed a mistake is the referee himself… because we prohibited him from knowing it. I think the time has come to change this… And I'm sure that this will be successful for football," Infantino said.