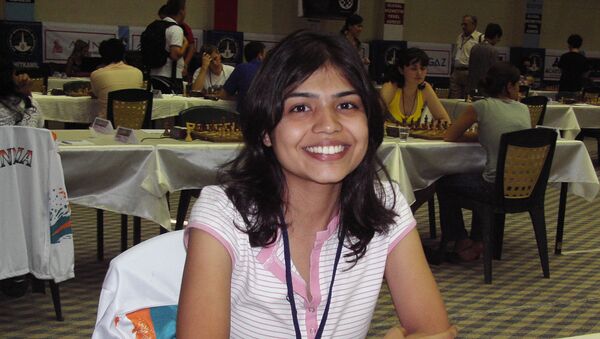 New Delhi (Sputnik) — Indian chess player Soumya Swaminathan on Wednesday announced that she would not be participating in the Asian Nations Cup Chess Championships 2018. The championship is being held in Iran from July 26 to August 4 and the country's strict religious laws state that women have to wear a headscarf or a burkha even while playing a sport like chess — a precondition Soumya describes as "violation of basic human rights."

"I'm very sorry to state that I have asked to be excused from the Indian Women's team for the forthcoming Asian Nations Cup (Asian Team) Chess Championship 2018, to be held in Iran from 26 July — 4 Aug 2018, as I do not wish to be forced to wear a headscarf or burkha. I find the Iranian law of compulsory headscarf to be in direct violation of my basic Human Rights, including my freedom of expression, and right to freedom of thought, conscience, and religion. It seems that under the present circumstances, the only way for me to protect my rights is not to go to Iran," Soumya wrote in a Facebook post announcing her decision.

"Willingness, request and enforcing are three different things. You cannot enforce a dress code on an athlete while it's fine if the sportsperson is agreeing to wear it willingly. In the case of Soumya Swaminathan, the government should have dealt it with more interest and the Iranian sports authorities must have been conveyed the protest through the diplomatic channels. It has to do with the morale of the player and the government of India has failed to protect it," sports commentator Harpal Singh Bedi told Sputnik.

Chess star Soumya Swaminathan pulls out of Iran event over headscarf rule.
She was also worried that the chess pieces would look like this… pic.twitter.com/wze6FT4WHc

Saumya Swaminathan, Appreciate and support your stand against "compulsory" headscarf" rule as violation of your personal rights.
Fanaticism mst be curbed

Indian chess star says no to headscarf, pulls out of event in Iran — Times of India https://t.co/tsdqwNPQ2i via @timesofindia

Chess grandmaster Saumya Swaminathan challenging the might of Islamic fundamentalist rogue regime of Iran.I salute her courage not to wear headscarf dictated by Iranian Govt that forced her shun the tournament held in Tehran.

It really needs a lot of courage & conviction to pull out of a prominent event for what you believe is right
She's a truly empowered woman, not like the pseudo-liberal feminists

1) Now, Indian chess star Soumya Swaminathan says no to Hjab, pulls out of event in Iran

Shame on Iran. Religious dress codes should not be imposed on Players. Salute to Soumya & Heena

Soumya is the second Indian player to have pulled out of tournaments held in Iran due to the country's strict dress code. Shooter Heena Sidhu pulled out of the 9th Asian Airgun Shooting Championship hosted by Tehran in December 2016 under similar circumstances.